Earlier today we posted a story on Madden NFL 11 and the game’s best overall players, and with the game launching within hours we thought it’s time for a Madden 11 review round-up.

The game will be on multiply platforms, which include PS3, Xbox 360, Wii, 3DS, PSP, PS2, and Apple’s iOS. We have found three detailed reviews of Madden 11, and each gives their own twist on what looks to be an extremely fun game. 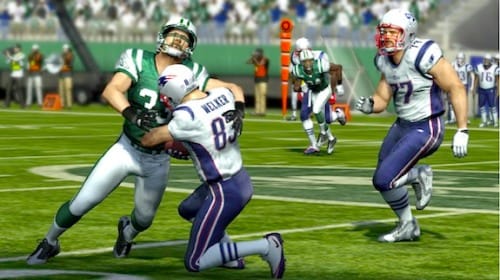 MTV Multiplayer ask if faster games are better games, and their Madden 11 review looks at the basics, highs and lows, and in their verdict they explain how Madden is the best football simulation game. MTV loved the improvements to O-line and the running game, which create a more fun, complex, and authentic game.

Kotaku says Madden NFL 11 will give you a run for your money, the review is wrote in their unique style, explaining what they love and hate about the latest version of Madden. They found the game to be “loads of fun”, but complain about Gameflow and the problems with defense.

The third review you may want to read is from VG Revolution, they found Madden 11 pros to include new sideline and back endzone catches, the cut scenes, lighting system, dual stick controls, and the new locomotion system. VGR did not like the choppy commentary and found the replay transitions were off at times.

Read the three reviews via the above links, and let us know what you think of Madden NFL 11.