Just when you thought Rocksteady Studios had already revealed all the characters that are set to appear in their eagerly awaited game Batman: Arkham City, another villain pops up out of the blue. This time it comes unofficially with a sense of controversy as reports are suggesting footage of the new character, the Mad Hatter, made its way online before the developers intended and was soon after taken down.

Luckily for us a certain website, NeoGAF, was on the ball and they were able to get a screenshot fresh from the clip of the mind meddling character. Up until now Rocksteady had been somewhat methodical in unveiling details about their sequel. The latest character revelation came from a glimpse of new achievement trophies that hinted at Nightwing, which was later confirmed.

We’ve brought various articles to our readers detailing the new characters as they appeared and even brought you news of the many Arkham City themed items which have made their way onto the Xbox Live Marketplace. Today’s revelation is an interesting one however, largely due to the fact that the developers have not yet made an official announcement of the character.

The Mad Hatter character himself is just as intriguing. He is the skilled research scientist, Jervis Tetch, who was obsessed with the Lewis Carroll creation from the popular story of Alice in Wonderland as a child and grew up thinking he was him. He uses hypnosis and mind control to manipulate his victims. We are very excited to see what kind of spin Rocksteady have put on their version of the character and how much of a role he will play in the game.

Check out the image below for a sneaky peek at Arkham City’s mentally deranged Mad Hatter himself. What do you think of this character? How much of a role do you think he will have in the game? 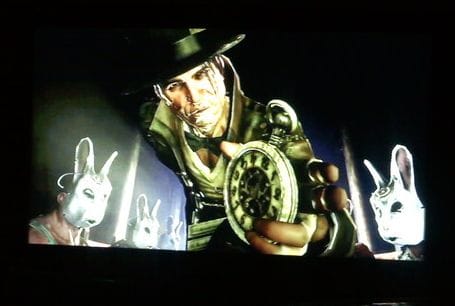