The Mad Catz Cyborg R.A.T. 9 gaming mouse was mentioned some time last year, and again at CES 2010, so was pleasantly surprised when the device was finally released. You can see from the images that nothing has changed, so that tells us that the thing is big and heavy; although Devin Coldewey from CrunchGear thinks it is awesome.

The concept behind the Mad Catz Cyborg R.A.T. 9 is that it is a customizable mouse, Coldewey points to the fact that this has already been done before. I have to say that not like this though; I do agree that the thing looks heavy, but it is much better to feel the weight of something while gaming — I believe this helps you to stay in control. 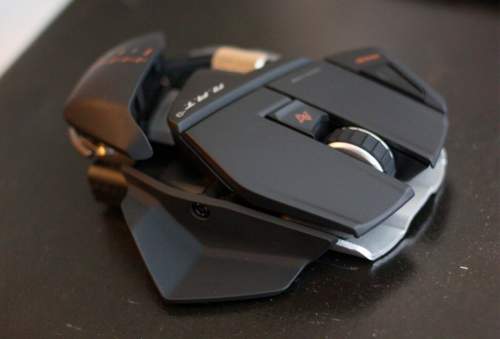 Having a brief look at the review of the device, it is clear to see that Coldewey thinks that the R.A.T. 9 is awesome, the fact that it has a precise sensor and he loves the hair-trigger main buttons. However, there is a downside; some might think that the mouse is a bit on the large side and that it eats battery life.

For those of you who love your gaming, then the Mad Catz Cyborg R.A.T. 9 is one to consider, but the reviewer believes that there are better options out there. Two that he mentions is a Mamba or Logitech MX Revolution.

I know a few PC gamers, and I am not certain that they will be too happy changing the batteries that often, this could be the one thing that goes against it. Do you think that will make a difference?

For those of you Mad Catz fans, then maybe you should consider the new accessories just for Black Ops.