As most of you will already be aware, Apple has now upgraded their lineup of Macbook Pro laptops on the Apple store online, and the new models are available to buy now, all of which have received hardware boosts.

From the 13-inch Macbook Pro to the 17-inch, you’ll see on the store that while the new features are obviously very exciting, the price of these laptops a still a major stumbling block for most consumers.

At a starting price of $1199, the new models certainly aren’t cheap, even if it comes with state of the art processors such as Intel’s new Sandy Bridge chipsets – However, if you’ve got the money to spare, then why not splash out on a premium laptop, as most of you will probably argue.

The most expensive Macbook Pro now stands at a staggering $2499, and that isn’t even with any upgrades such as a SSD instead of a hard drive. This is the 17-inch mode we’re talking about and specs include a 2.2GHz quad-core Intel Core i7 processor with a 750GB hard drive, 4GB of RAM and AMD Radeon HD 6750M (1GB dedicated RAM). 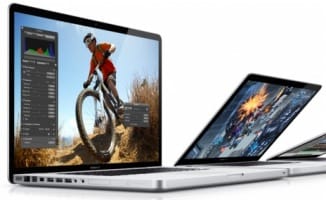 Some of you may be thinking what’s the point spending $1000+ on a laptop when you can buy a similar non-Apple model with the same specs for half the price? Then again, this is an Apple product that we’re talking about, and you can’t fault the stunning build quality and fast bootup times which are guaranteed with a Macbook.

Having seen the new Macbook Pro prices for yourself, what are your thoughts on this. Are you intending to pick one up, or do you think they are definitely overpriced?