We have yet more fresh details to bring you now on the expected Apple Macbook Pro 2011 hardware refresh, as it has been reported that the new models may replace the existing trackpad with a glass design, amongst other new features.

According to BGR’s ‘exclusive’ report, their Apple tipster has told them that a glass trackpad design is a strong possibility for the new models, which could be announced by Apple at any time – or even this Thursday if previous rumors are to be believed.

These glass trackpads are thought to be slightly larger in size than the trackpads you see in current Macbook Pro models. Here is a picture of the normal trackpad, just to refresh your memory: 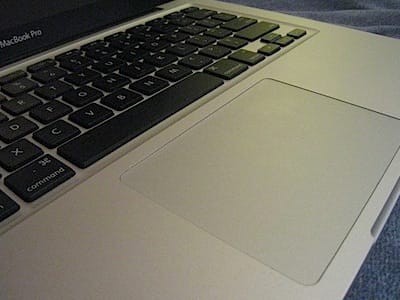 As you can see, there isn’t a lot of room for Apple to maneuver between this larger trackpad and the keyboard, it will be interesting to see if the keyboard is altered slightly as well.

Other details mentioned in BGR’s report reveal that the Mac OS X software could be loaded to a separate built-in SSD drive, but everything else installed on the Mac will still make use of a hard drive. This feature alone could make devices significantly faster than current Macbook Pros, so we’re waiting to hear more details about this aspect.

You’ll be pleased to know that the new models may even be as much as half a pound lighter than the old models, which is a much welcome aspect of the refresh if it turns out to be true – you still can’t beat the Macbook Air in the weight department though.

What are your thoughts on these new potential features for the 2011 Macbook Pro? Which are you more excited about? The glass trackpad rumor sounds the most interesting to us. You can read a recap of all the recent Macbook Pro related rumors and news here.