The new MacBook Pro 2011 features and release details has been a hot subject this week, and has not spent much time out of the news. It is for this reason why we would wanted to offer a rumor roundup of what is known so far. The most up-to-date bit of news that we have is that the refresh could come in black.

We cannot say for certain how much truth there was to this rumor, as it was from an Intel promo? It did not take long for speculation to begin that we could be looking at the new Pro. Personally I would not like this color model, as it looks like a black gloss finish and will show too many finger marks.

Next up was our article that looked at how the MacBook Pro might take a few design features from the Air. Again, these were just rumors, but it does make sense to try and slim the Pro down a little to shed some weight. However, Apple cannot afford to make too many drastic changes, as they still need to pack in all that hardware — especially the Superdrive. 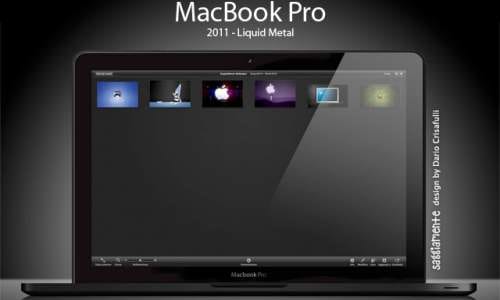 One of the most talked about subjects has to be the new MacBook Pro 2011 refresh release date. There are a number of rumors going around about this very subject; but the best guess is that it will be in March. There has been some controversy over this, as the refresh cycle has been anywhere from 8 to 10 months — the last four updates being every eight months.

This is as much as we know at this time, but we will keep you fully informed of any news once we get it. Once the new MacBook Pro gets released we can then start talking about the MacBook Air refresh, which is just crying out for a processor upgrade.