The 2014 MacBook Air update is live on the UK Apple store and is more of a refresh than total revamp, in fact this is a very tiny improvement considering the new specs compared to previous models.

We have included the latest options for the 2014 MacBook Air in a screenshot below with the price for 13-inch and 11-inch choices. You can clearly see a 1.4GHz dual-core Intel Core i5 processor is default, compared to the slightly lower 1.3GHz released in 2013 and available for purchase right up to last week.

All models have a shipping date of within 24 hours, so there’s no obvious delays for the 2014 MacBook Air release but dates can change depending on demand and stock levels. Apple might see orders increase if certain shoppers now purchase after waiting for an update to the specs. 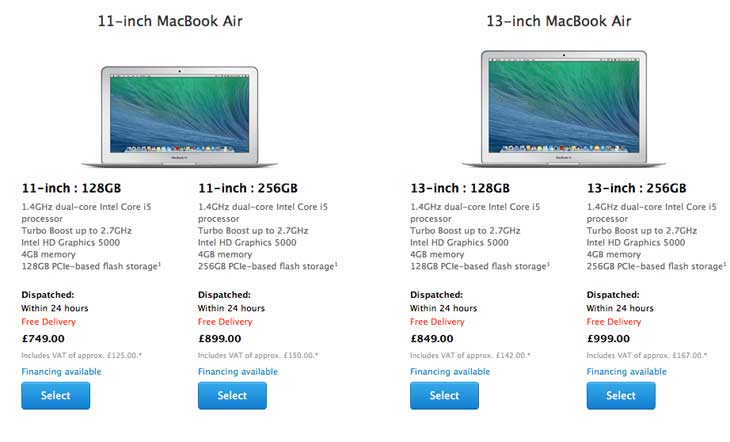 MacBook Air 2014 vs. 2013 price and specs – the new prices can be seen in the screenshot above, but we have also included a screenshot below that reveals the 2013 models live a couple of days ago and the differences in specs and prices. This reveals exactly what changed for 2013 MacBook Air vs. the 2014 MacBook Air refresh in terms of price and main specification. 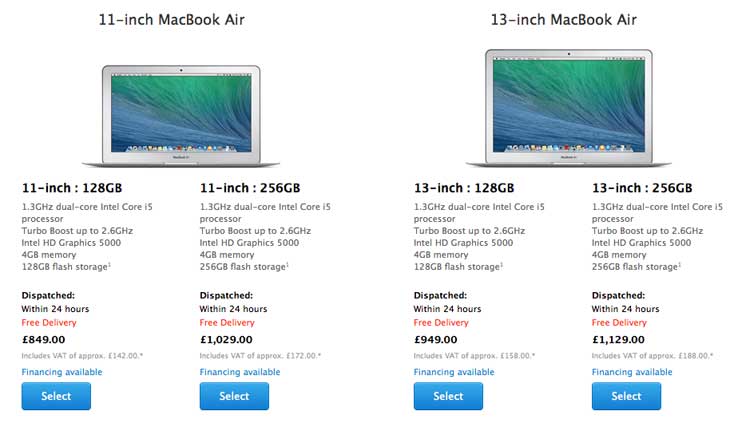 The faster processor will be welcomed and the price drop will also be seen as a good move by Apple, but we do wonder if some people wanted a lot more in terms of a specs bump. There’s a good chance a total revamp is planned, but this move is to keep sales moving with a new lower price for the time being in our opinion. Look towards either WWDC or fall for a major update to the MacBook line.

Do you welcome the 2014 MacBook Air price drop and slight CPU bump, or did you want a bigger upgrade to specs?

We touched on some rumors about the pending update this past weekend that can be read in this article. It is worth noting that a few blogs are reporting that everything is the same other than a small change in CPU speed, but this is clearly untrue when it comes to the lower price, again seen by the comparison offered above taken from Apple’s official store today and a few days ago.