There’s no denying that design of the 2013 Mac Pro is radical, and no doubt in time the likes of HP will borrow from its design, which they have done so in the past. However, while there are those who admire the all-new design, there are others who hate it. We’re all for hearing both sides of the argument, but we do love how far some people take their thoughts with the new 2013 Mac Pro design.

Apple has taken the minimalist approach for desktops to a whole new level, and this has made for some rather interesting Photoshop work, as you can see for yourself below, thanks to AppleInsider. We have to love how far some people will go to put across what they believe the all-new Mac Pro could be used for, or looks like. 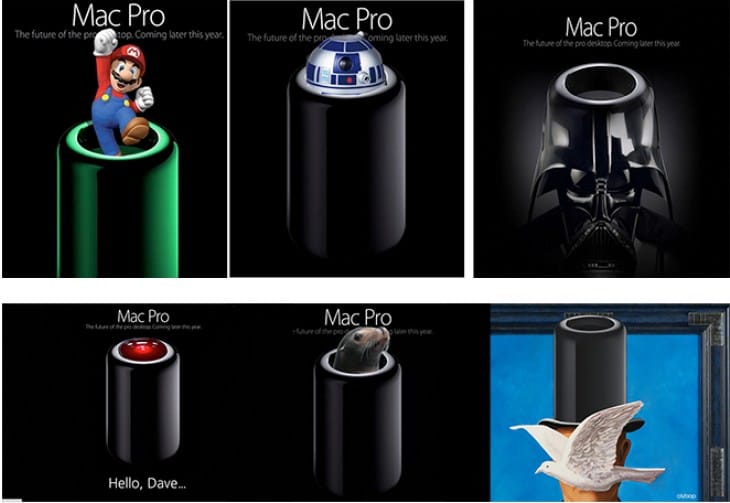 The reason for this is rather simple, as the new design does look very much like some sort of cylindrical vessel. You will be able to see these Mac Pro parodies below, where they range from Mario, a sea-lion and R2-D2 leaping out of one, to others, such as looking like Darth Vader, a red button and also Lincoln’s top hat.

We had expected the Internet to give their two-cents worth, showing their disparagement Apple over the radical 2013 Mac Pro design, considering some of the big tech sites offered their appreciation for the new model. Some of them have said that the new design is a marvel to others saying it’s a brilliant insanity.

Whatever way you look at it, there’s no denying that the new design is a huge departure from the norm, and so will always have its lovers and haters. However, for those who used to say that Apple had lost their way, and were not able to innovate, we think they have just answered those critics.