Love it or hate it, the design of the Mac Pro 2013 is certainly very different, and will no doubt be copied some time down the line. Putting the looks aside, there has been talk that the hardware is not as powerful as some rival devices, although we doubt they have a small form-factor as Apple’s upcoming desktop?

As a way to help prove itself, there has been a Mac Pro 2013 review of its performance benchmarks, and the surprising thing, the desktop was running Mac OS X Mavericks, albeit a custom build version. It’s funny how this test has already been leaked, considering we don’t even know the full Mac Pro 2013 specs just yet, although we do know some of the main ones, which we recently discussed. 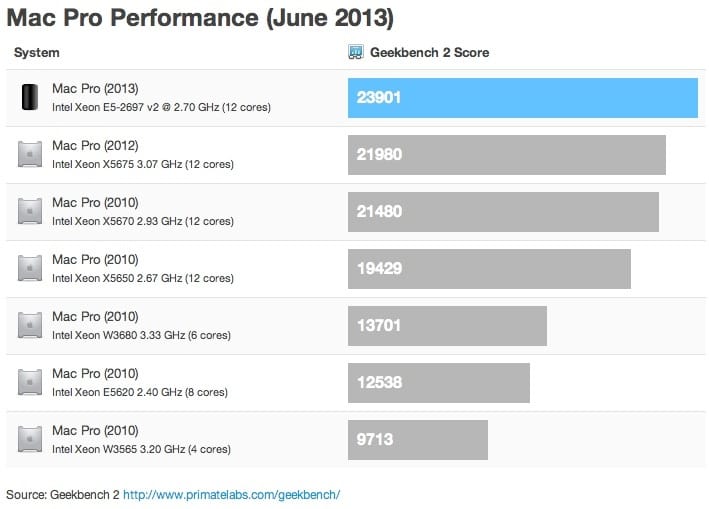 Because this is a leak, we cannot be certain if these all-new Mac Pro test results are the real deal or not, but if they are, then we have to point out how impressed we are with them, although because this is an early build of Mavericks, we’re sure Apple will be able to squeeze even more performance the closer we get to the actual Mac Pro 2013 release date.

The early 2013 Mac Pro review used a model with a 12-core Ivey Bridge 2.7GHz processor and a massive 64GB of RAM. This was put up against a range of previous Mac Pro models, with the 2012 model giving the best fight with its 12-core 3.06 GHz Westmere processor, the results of which you can see in the illustration above. However, the full benchmark tests can be found by visiting Geekbench Browser.

You’ll notice that in some tests the all-new Mac Pro performed marginally better, while in other tests there were substantial improvements over its predecessors. However, looking at those tests scores, it’s clear Apple’s claims of the 2013 Mac Pro being twice as fast as the current version seems a little optimistic at best.