Earlier this week we had assumed that Apple would make the Mac Pro 2013 edition available after Christmas, believing that releasing it before then would have been a silly idea — how wrong was we. Apple has now made their all-new Mac Pro available to purchase today, with shipping set for December 30th.

Even though we were wrong about that, we were right about its release in a way because we did say they should make it available for pre-order before Christmas, which is basically what they have done. This means that you can order your 2013 Mac Pro and configure it to your needs, ready for you to take delivery of it a few days after Christmas.

There are two Mac Pro options to go for, although as you know these are only the base models for each and can be configured to your needs. The first is the quad-core model with its starting price of $2,999, or the 6-core version, which starts at $3,999. 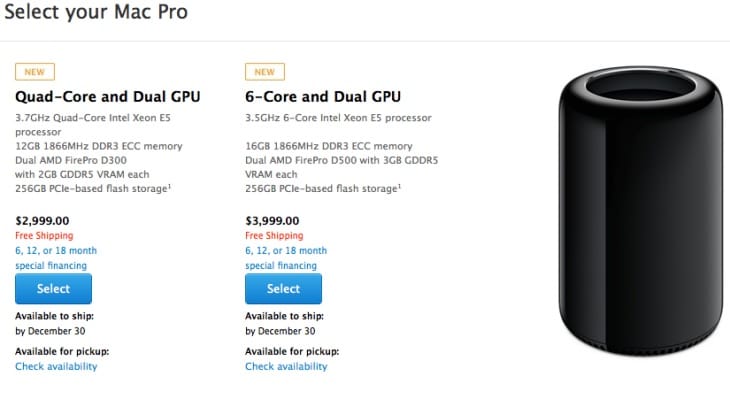 When looking on the website you will see how easy it is to allow the price to go out of control, as we chose the best model and added the best hardware options, although did not add software. The final price of our top spec 2013 Mac Pro was $13,332.00 — not for the home user then.

It is worth noting that we went with a 4K display rather than the Apple Thunderbolt Display, the display in question is the Sharp 32 inch PN-K321 4K Ultra HD LED Monitor, which we had already seen appear on the store and disappear again last week.

If you have configured your Mac Pro 2013 model, we’d love to know your final price.