In the early part of each year there are speculative rumors as to what products Apple will be releasing in the coming year, and so it comes as no surprise that an analyst has predicted the Apple 2014 roadmap. Many of the products that appear on the list are pretty obvious, although the lack of a new Mac mini is a strange one indeed.

We know that Apple is to release a variety of new products this year, but guessing the first is always a risky thing. However Ming Chi Kuo from KGI securities believes that it could be a more budget friendly iMac, which will be released in Q2.

The iWatch is also on the roadmap and so are the usual suspects, so a new iPad or three and two new iPhones.

Going back to the Mac mini, we do find it strange that the analyst decided to omit this small desktop from the list of upcoming Apple devices, especially as a new model is long overdue. This will no doubt gain some negative feedback because a new Mac mini is very much needed, although before you get too upset, just remember this is all guesswork.

We still very much believe that an all-new Mac mini will be with us this year, and it could be announced at WWDC, although not sure it will be as small as this one. 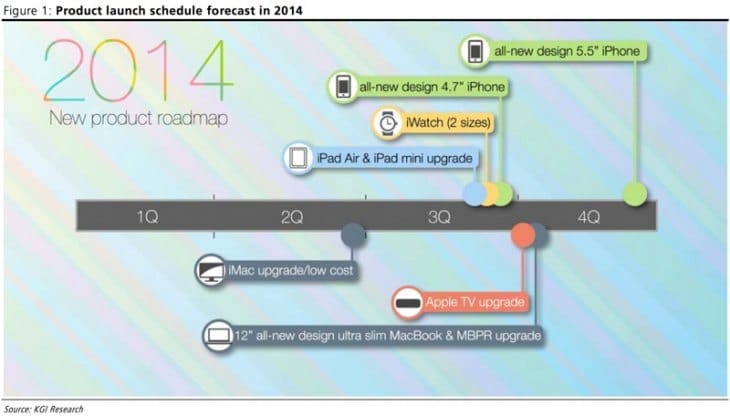 Ming Chi Kuo seems to be on the money with most of the other proposed Apple products for 2014, although they are rather obvious and so it’s not that hard for most of you to come up with an Apple roadmap.

Kuo doesn’t believe that a full-on Apple TV set will be released, and we do agree. However, there seems to be another device missing form the list, the iPod touch 6th generation.

The likelihood that Apple would miss out on the iPod touch 6G this year is slim, as come October it would have been 2 years since the release of the current 5th generation model. Seeing as though the iPhone 6 is expected to get an increased screen size, it stands to reason that this will make its way to the new touch, and so its release this year is very likely.

Do you think Apple would miss updating the Mac mini and iPod touch this year?

Thanks to Mac Rumors.