There has been some speculation that Apple are going to release a new Mac Mini in 2014 and the tease has continued with an interesting listing. A Mac Mini release in February has been strengthened by a major Belgian electronics firm that put the device up for pre-order on their website.

Retailer Computerstore.be posted the Apple Mac Mini I7 with pictures and a lengthy product description, the listing has since been removed from the site. This potential leak will certainly keep the hype going for a 2014 Mac Mini release, the device has not had an upgrade since October 2012.

According to Mac Rumors the Belgian company confirmed that they had posted the listing on information from Apple or reliable sources. Despite this claim a majority of rumors or leaks turn out to be unreliable so whether or not the listing can be trusted is anyone’s guess. The site states that the new Mac Mini is powerful despite being small, coming with an aluminium housing. 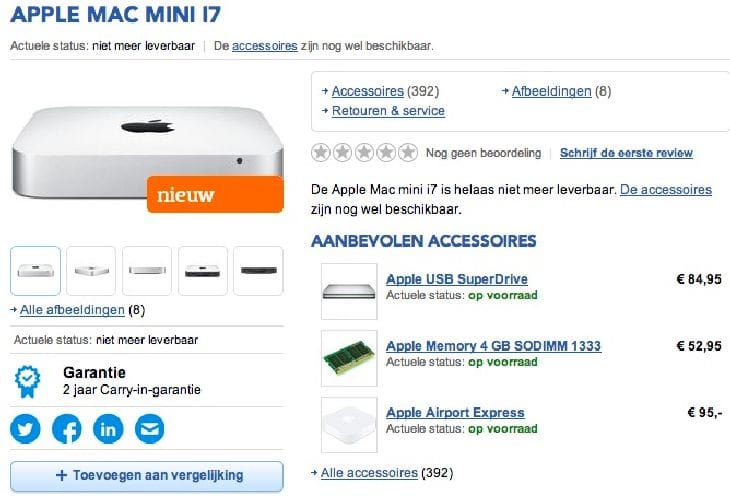 The potential new Mac Mini was not given a price or solid release date, although the retailer has confirmed that due to placeholder listings, a launch towards the end of February can be expected. Further doubt has now been cast on this since the listing has been removed, unless Apple has intervened and demanded the product be removed from the site.

Other features reportedly packed inside the device include Intel’s latest I7 Haswell processor, Intel Iris graphics and OS X Mavericks. Whilst it will be very exciting to see if the newest Mac Mini releases this year, it is by no means a certainty. We also looked at the possibility of Apple launching a television set in 2014, which was hinted at by a big share investment.

Are you an Apple fan who wants to see a new version of the Mac Mini released this year? Let us know what you think of the listing that appeared and if you trust its accuracy.