Just hours ago we told you about the exciting, but surprise transfer of Rickie Lambert to Liverpool FC which shocked a lot of FIFA 14 players. Now, lightning may strike twice as another Southampton player, Luke Shaw could be heading to Manchester United.

If you are a FIFA player and have been following real-life transfers, you’ll know that Luke Shaw to Manchester United has been a hot transfer saga that has been going on for a few weeks.

Some fans really want it to happen, especially FIFA players. Luke Shaw is one of the most improved players in the Premiership this year and now we offer you a prediction on what his potential rating could be in FIFA 15.

Luke Shaw only shipped with a 70 card in FIFA 14, but his excellent performances merited an upgrade from EA and Shaw even featured as an in-form player with a 74 card. 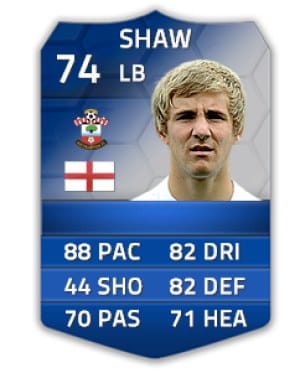 Looking ahead some players have argued that Luke Shaw is due an upgrade for FIFA 15 and should be given a 77 card. That is a massive boost from 70 you have to say and it will be interesting to see if EA are willing to listen.

Will this transfer to Manchester United boost the chances of Luke Shaw getting a FIFA 15 upgrade, or will EA do it anyway? Give us your thoughts on this if you are a fan of this player and currently use him in your FIFA 14 Ultimate Team.