We’ve been looking at how the teams could change in the updated FIFA 15 game arriving later this year, with FC Barcelona being one team that could radically improve in both real world football and the virtual game. If certain football transfer rumors can be trusted and if everything goes FC Barcelona’s way, then we could be looking at Liverpool FC’s Luis Suarez joining Lionel Messi and Neymar Jr. in the ultimate Barcelona team.

This would certainly create my favorite FIFA 15 team to play, and just thinking about FC Barcelona benefiting from Neymar’s speed, Messi’s dominance, and the genius of Suarez would be something else completely.

The chances of Suarez transferring from Liverpool to FC Barcelona might stand a better chance than most people think, which is due to rumors coming from a reporter named “Chisanga Malata”. They claim Suarez is “receptive” to joining Barcelona or Real Madrid and has “decided to leave”, and this is a development since we looked at Luis Suarez in Barcelona vs. LFC for FIFA 15.

Liverpool FC fans will love FIFA 14 stats for Luis Suarez, as seen below, which have changed dramatically since his good season and would make FC Barcelona want him even more. If Suarez moves to FC Barcelona, what would you like to see as his initial rating in FIFA 15? 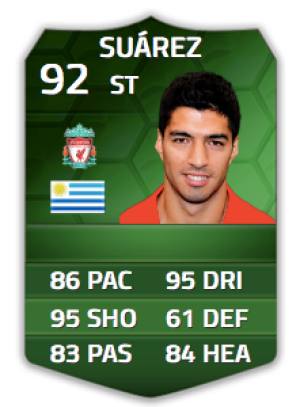 Would you love to see FIFA 15 include this FC Barcelona team and if so, would they become the team you’ll play most with? If the Barcelona Football Club manage to get the transfers they need, then this would also create some problems for other teams in that region.