We love it when technology, music and entertainment come together and we have something which we think you are going to love now. A Looper app for iPad has gained mass popularity, thanks to being featured on the Jimmy Fallon show during a live performance of ‘The Lion Sleeps tonight’.

This has to be one of the greatest things we’ve seen in a long time and a fantastic advertisement for the iPad and the app in question. The exact app being used is called Loopy HD and it is now available to download with a 50% price cut, which we’re guessing is specifically down to being featured on the show.

Billy Joel is a musical legend, but we do have to wonder how Loopy HD developer Michael Tyson felt when seeing Joel use his app in front of millions of viewers live on television. Jimmy Fallon’s vocals are not bad either and we’re guessing that most of you will be racing to the app store now to download Loopy HD for iPad. 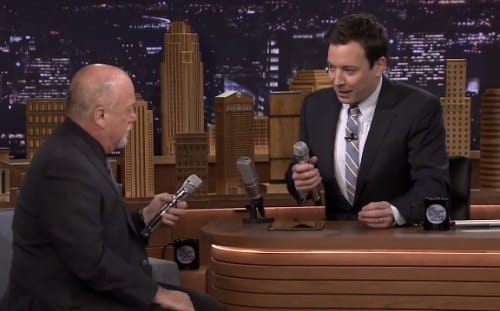 Paying $4.49 (discounted from $8) for the chance to recreate The Lion Sleeps Tonight with your friends is an opportunity that you may not want to pass up this weekend. We’re not sure about you, but we even had a few goosebumps watching Fallon and Joel go at it live on TV.

Watch the amazing video below which has now gone viral and let us know if you will be buying Loopy HD for your iPad. For those asking, Loopy HD is also available for iPhone, but we think you’ll have a lot more fun with the app on tablet.

Enjoy the video and let us know what you think about it below.