A fun new application has recently been released which allows users to turn photos of themselves into realistic looking aliens. Alien Booth 1.0 is available for owners of the iPhone, iPad, and iPod Touch.

Released by independent developer Rocket 5 Studios, the app lets users quickly create aliens using the simple to use controls. Photos that are taken by the devices camera or which are already stored in the photo library can be used.

Once you have created your alien you can send via MMS, save to your photo library, and even use them for great avatars on social networking sites such as Facebook. Users can easily share them from within the application via email, Facebook and Twitter. 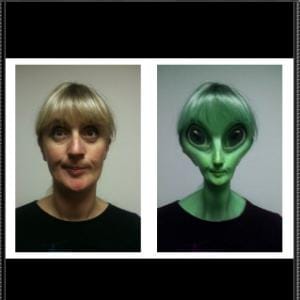 Users can even change pictures of their pets, and a quick shake of the device will display a before and after preview. Current users have been giving the app some rave reviews so far. Alien Booth 1.0 is available worldwide on the App Store for only $0.99/£0.59. iOS 3.0 or later required.