There is a lot of confusion in the air at the moment, with many League of Legends players wondering where is new champion Kindred after the latest LoL patch 5.19 went live.

For those that still don’t know, Kindred has been delayed. Riot has confirmed this in a new statement this week, apologising and saying that the new Kindred release date for LoL will be when LoL patch 5.20 is out.

Below is what Riot has had to say about the issue, revealing that the team discovered a ‘gameplay-impacting issue’ which meant that they couldn’t deploy Kindred in its current state. 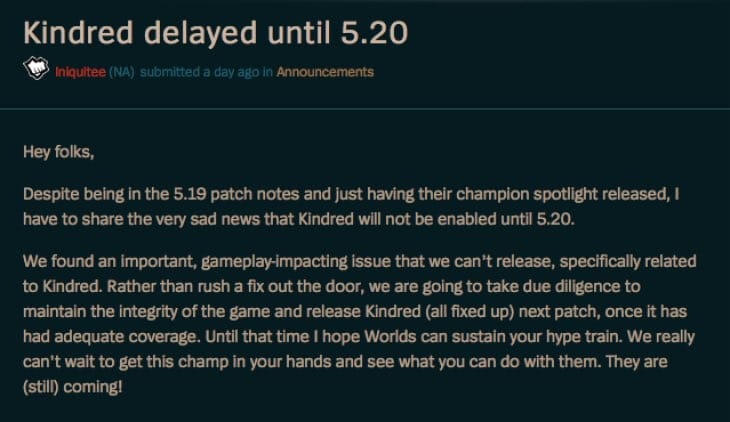 Rather than fix up Kindred quickly and get the character pushed out into 5.19, Riot has now decided to take their time to ensure the character is fully ready and then release with the LoL patch 5.20 notes which are now in progress.

Obviously, it’s frustrating but Riot wouldn’t have pulled if it wasn’t a serious problem. Still, you can recap the patch 5.19 notes here to find out what else is new in the latest update as we all wait for League of Legends 5.20 to arrive.

Let us know your thoughts on the delay and your best theories as to what caused the Kindred bug in the first place.