If you like to do your bit for the environment you may be interested in one of Logitech’s latest keyboards, this is the Logitech wireless solar keyboard K750.

This keyboard is entirely powered by light, the good news is that it will charge in doors and stays charged for at least three months in total darkness, pretty neat, eh?

Logitech’s design team has not disappointed, this keyboard is just 1/3 -inch thick (roughly 8.5mm) and features concave keys, apparently they have combined the best from laptop keyboards and traditional keyboards to allow for faster and quieter typing.

The K750 uses advanced 2.4GHz wireless technology to communicate with with a receiver which plugs in to your computer/laptop, this is a unifying received which will accept other compatible wireless mice and keyboards, instead of having to plug in another USB receiver.

Setup is said to take just seconds, simply plug in the receiver and away you go, no software needs to be loaded, however you can install the Logitech Solar app, this tells you how much power you have left, and how much power the solar panels are drawing in.

The reusable energy is not the only thing which Logitech has thought about, the box if fully recyclable and the keyboard’s construction is PVC-free, find out more here.

The keyboard is cheaper than what I expected, you can pre-order yours here for $79.99, think of all of the money you are saving instead of forking out for batteries every few months.

I am hoping to receive a sample unit for review, when I do I will post a hands-on review to see just how good it really is. Check out the image below, do you like the design? Will you buy one? 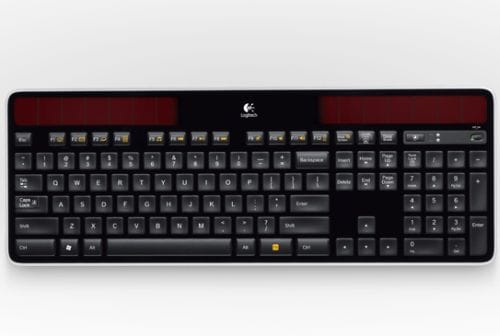