The Lizard Squad Twitter channel is back and while it has been up for a few weeks, the chaos is resuming this weekend with this being the very statement offered a few minutes ago from the group that has taken down big company servers.

In fact, the Lizard Squad Twitter page is officially found at twitter.com/LizardPatrol now, as the previous page had been taken down. The impressive growth of the new account is unbelievable and follower numbers have taken a massive leap this week. 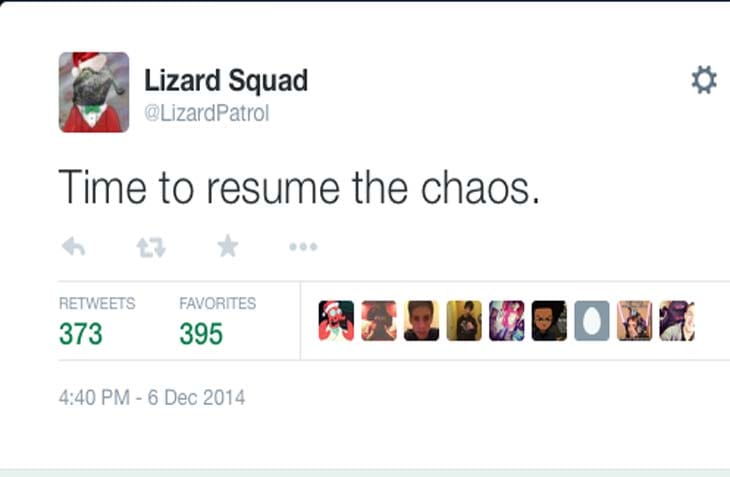 Earlier today, we published details on Xbox Live going down last night with problems being continued today. At that point, a few hours ago, the Lizard Squad Twitter page had just under 93,000 followers and at the time of writing this article, they now have almost 100,000 followers.

The growth is being pushed a wide media coverage, which again is being helped by a petition on the official White House website, the taken down of Destiny and Xbox Live servers, and other outages being credited to the group.

You can see one of the latest tweets above and this paints a picture of more “chaos” to come this weekend. Reactions to this tweet have been mixed, but gamers won’t want their Xbox One, PS4, and previous generation gamete disturbed when they plan to get online. Leave your comments below about the social growth, and of course taking down of certain servers.

Update: In the time we wrote this article, the Lizard Squad Twitter page jumped another 1,000 followers. By the time some of you read this update, we are sure there will be thousands more.

It looks like Xbox Live has gone down again on December 6th, within 24 hours of the last outage, and their Twitter page grew another 5,000 followers within another hour to 105,000.

Lizard Squad shows no sign of Twitter slowdown – this is one of the last updates to this article, as such on December 8 the group past 142,000 followers. It looks like Lizard Squad’s social growth is set to pass 200K by the end of this week, and unless Twitter removes the page we expect the group to keep going even reaching a million followers. This is helped by Twitter now being featured on Google with an “In The News” section for the groups social page.