The Lizard Squad group is clearly back on Twitter with a new page that took credit for taking PSN down on May 15 to 16, 2015. The downtime received mainstream media attention due to Lizard Squad being responsible for taking Twitch, Xbox Live, PlayStation Network, and many other services with DDoS attacks in the past.

When PSN went down last Christmas Lizard Squad claimed they used routers to take PS4, PS3, and Xbox gaming services down for vital hours over Christmas Day. The new Lizard Squad page on Twitter can be found @lizardlands, so feel free to follow to find out if they are responsible for an future outages.

As you can see with the Lizard Lands tweets below, it’s clear there’s going to be more take downs. Lizard Squad is asking what should be “next”? Considering we just saw PSN go down, will Xbox Live be next this weekend on May 16 or 17? 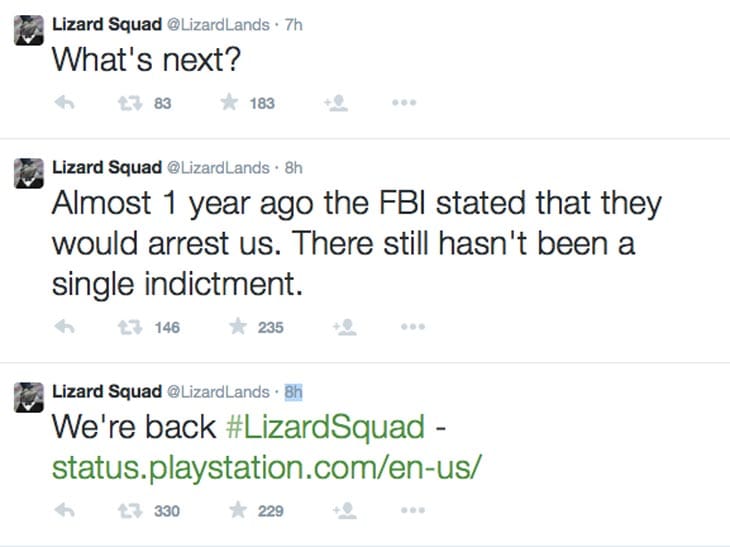 Some bloggers and mainstream media might feel this group is a bunch of kids, but they shouldn’t be underestimated when you consider the past take downs has revealed they are more than capable. In fact, the tweets above poke fun at the FBI and Lizard Squad seem to be more confident than ever.

How do you feel about Lizard Squad’s return on Twitter? We have had a quiet time without any major outages for PSN and Xbox Live, well not any by hacking groups. It looks like we could see the return of regular outages throughout May and June, unless Sony or Microsoft can stop DDoS attacks better than in the past.