LittleBigPlanet fans were given some rather disappointing news back in September of this year, regarding the unfortunate release date delay for the much-anticipated sequel, LittleBigPlanet 2. However, they then received news about a demo that was due to be released.

Well according to Paul Lamkin over at pocket-lint.com, the playable demo has arrived on the PS Store, and is available to download now. The demo may be a whopping 2GB, but it does provide users with three playable levels — Tower of Whoop, Avalon’s Advanced Armaments Academy and Rocket Funland. 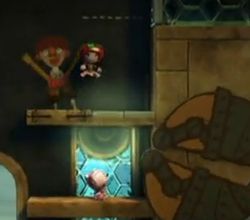 Fans don’t have too much of a wait until the actual game is released either, as LittleBigPlanet 2 is scheduled to hit US stores on January 18th and UK stores on January 21st. If a recent post by Michael at mmomfg.com is anything to go by, fans of the first game will love the sequel.

Michael’s first impression of the LittleBigPlanet 2 demo is that the lighting and particle effects have been improved since the original game, and the sequel appears to be bigger and better than the first. Players will also have more customization options in LBP 2.

Have you downloaded the LittleBigPlanet 2 demo yet? If so, what are your first impressions?