The Xbox Live status page is showing a red alert on December 11, although this isn’t for the Xbox One and 360 gaming services. Instead of the core networking being down today, like we have seen when the likes of Lizard Squad attack, we are seeing a number of apps in the “Limited Status” for Xbox Live.

We have run some tests ourselves and did notice problems with the Animal Planet app for Xbox. You can see a screenshot below with the official statement from Microsoft, although this can be in a standard manner when apps run into issues. 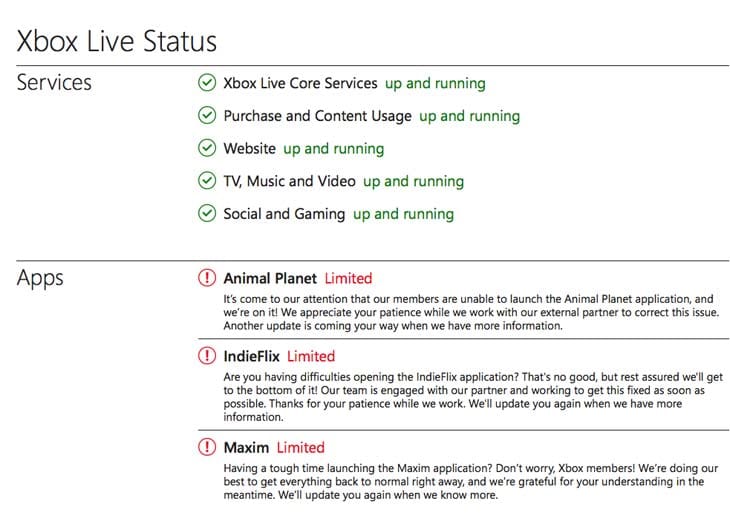 As you can see above, the Xbox Live status page details problems with Maxim, IndieFlix and Animal Planet apps on Xbox. They basically detail an issue with launching the Maxim application, IndieFlix, and Animal Planet, but again this is in a standard format that’s almost robot like.

It’s clear the issues might lie with the 3rd parties involved and once they have fixed their service, then each of these applications will start working again. It’s strange all three apps went wrong at the same time, and we’ve reached out to Xbox Live support for comment.

Are you having issues launching the Animal Planet, IndieFlix, or Maxim app on Xbox? If so, leave the generation and issues you’re having in the comments.