Fans of the car showcasing hit series Top Gear are in for a treat as TomTom has just announced their new limited edition Go Live model of satellite navigation based on the popular programme, complete with points of interest related to the show, a Stig mode and Jeremy Clarkson’s voice.

It features all the normal features you would expect from a TomTom Go Live sat nav system; QuickGPSFix technology, TomTom Weather, TomTom Places, the TomTom Speed Camera service and a year’s worth of their flagship HD Traffic technology, except it has been given a few added extras including Top Gear raceway and race track locations built into the points of interest database, themed icons, shut-down and start-up and the choice of either having the device in Stig mode, making it as silent as the mysterious character or having Jeremy Clarkson’s voice narrating.

In a recent article we brought our readers back in May, TomTom was introducing their new Go Live 800 series, which included the 820 and 825 models. These models provided a year’s worth of LIVE services including the HD Traffic technology detailing accurate traffic data, such as alternative routes and incident reports every 2 minutes.

Corinne Vigreux, TomTom’s Managing Director calls it ‘the ultimate driving companion’ for Top Gear fans, insisting it ‘is perfect for drivers who love the open road.’ According to Expert Reviews, this Top Gear themed TomTom sat nav will include voice control and command for the address entry, Bluetooth hands-free calling and features more maps than the previous models. It will cost £179.99 and is on sale now, but is only available in the UK exclusively at Halfords.

Are you a fan of Top Gear? Will you be getting this themed TomTom? 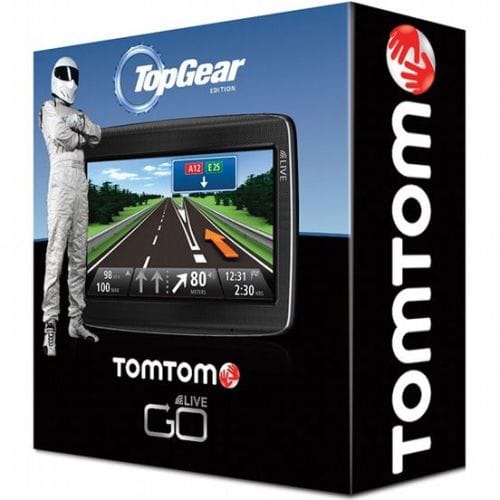