For those who are still actively searching how to upgrade the PS4 hard drive, game peripheral specialists Nyko have announced a new product at CES 2015 which we think you may be interested in.

The PS4 Data Bank by Nyko is coming this year and it offers a way to support PS4 3.5-inch hard drives with relative ease. Sony allows PS4 owners to change their 500GB hard drive if they wish, but only if they use a 2.5-inch standard which are often more expensive than 3.5-inch hard drives.

Now Nyko are coming up with a clever way of saving you money in the long run, whilst trying to maintain the stylish aspect of the PS4 design as well. Take a look at the images here showing the Data Bank attachment which clips on to the top of the PS4, similar in the way in which you would swap out a PS4 faceplate. 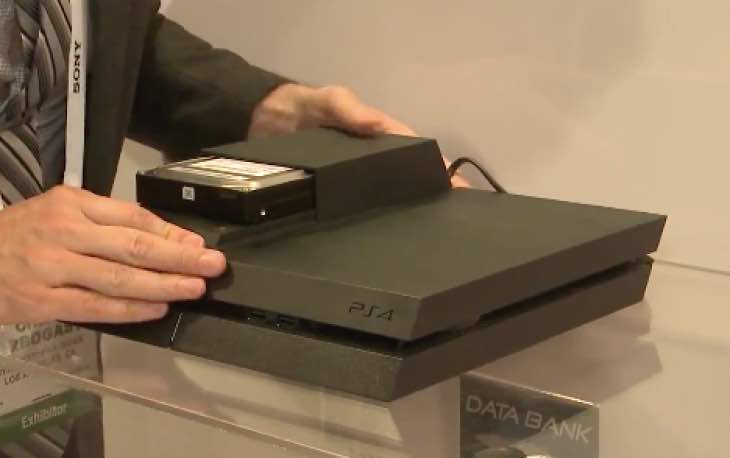 It actually looks very nice and for those that have a 3.5-inch hard drive lying round, it could be a great option for you. Some gamers don’t have a problem with deleting game data after completion, but for others upgrading the hard drive will be one of the first factors to consider.

We can now give you a heads-up on the important PS4 Nyko Data Bank price and the likely release date on when to expect it. It hasn’t been made official per se, but a Nyko representative at CES 2015 told media that the price should be between $30-40 and that a release should happen in the 2nd quarter of 2015 and definitely before E3 2015 in June.

If you can get hold of a 5TB 3.5-inch drive for a good price, paying $30-40 for this luxury is obviously a great way of extending the PS4 storage. If you want to improve PS4 performance though, you’ll need a SSD drive and 3.5-inch SSD drives for PS4 may be harder to find.

Either way, it’s nice to see more external storage options for PS4. Let us know your thoughts on this product and if you are willing to buy it.

Do you have good experience with Nyko products or not?