With the grand finale of Life is Strange Episode 5 now released, speculation on a Life is Strange Season 2 release date has unsurprisingly started to ignite on social media.

It’s fair to say that most fans can’t bear the prospect of this being the end of the game and are assuming that developers Dontnod are waiting for the go ahead on the next big chapter for the game.

While nothing concrete has been mentioned officially on Life is Strange Season 2 coming out for PS4, Xbox One and PC, we can see that fans are still asking the developers questions on if the ‘rumors’ are true about it. 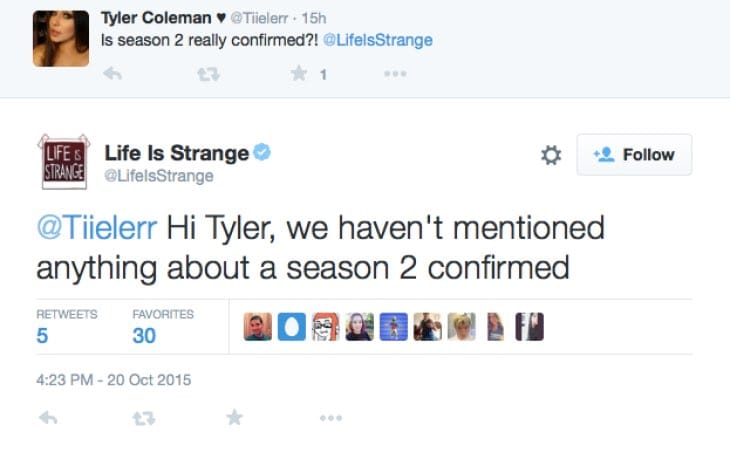 Above is the reply from Dontnod Entertainment which has done little to calm the anxiety of fans who are believing that more is coming in the future.

We still love the fact that the developers are happy to answer questions like this, as it neither confirms or denies the possibility – giving everyone thoughts and ideas on how the story could continue.

Having said that, many fans have also said that they don’t want Life is Strange Season 2 as the story has ended so perfectly at the end of Episode 5.

What are your thoughts on this, after playing Episode 5 – would you be happy if Season 2 for Life is Strange was confirmed, or are you happy to leave the game for good after Ep5?