Now, it looks like we could be getting close to a release as Sony are now offering big discounts on the PlayStation Store for the first episode.

While the developers have been reluctant to offer a solid release date, we can see that there’s big expectation for Episode 4 to arrive this week with the new PS Store update for July 14 2015.

In the meantime though, if you haven’t played Episode 1 now is the perfect chance. In Europe, you can now get the game with a massive 40% discount meaning that you pay just £2.39 in the UK. 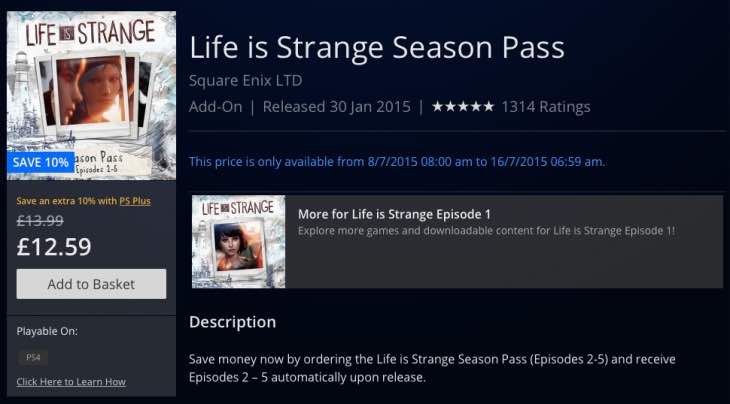 On top of that PS Plus members get a further discount. Since most of you will be subscribers it means that Episode 1 is now just £2.

This special offer will last until July 15 – so does that mean that Episode 4 will be available then? Let’s hope so as anticipation is through the roof at the moment for one of the surprise hits of 2015 so far.

You may also want to know that the Life is Strange Season Pass is on offer too. It’s just £12.59 at the moment which is a 10% discount from the original price – remember that it will cover Life is Strange Episodes from 1-5.

How excited are you about the release of the 4th Episode for Life is Strange, do you have the Season Pass ready or will you now buy it since it’s 10% off?