The newest phone on the block is the LG V10, which in terms of its size and specs is in competition with the Samsung Galaxy Note 5 and the Apple iPhone 6S Plus. However, the new phablet has some unique features that will hopefully set it apart from those other two, such as its 2-inch strip on the main screen, and the dual front-facing 5-megapixel cameras allowing for 120-degree photos to be taken.

It’s very obvious that people will want to know how the three of these devices compare side-by-side, seeing as though they are almost 6-inch phablets. If you were to go on just specs alone, then the iPhone 6S Plus would not even come into the equation seeing as though on paper, its specs are nothing like the other two devices. However, as ever, the iPhone has always been able to punch above its weight because better use of software. 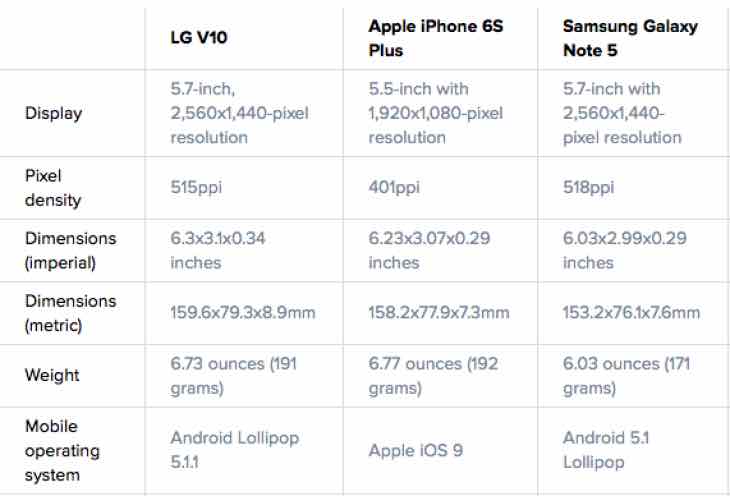 With their main inner workings, the V10 has a Snapdragon 808 processor, the Galaxy Note 5 a Exynos 7 Octa 7420 chip and the iPhone 6S Plus makes uses of the 64-bit A9X processor with M9. As for RAM this is 4GB, 4GB and 2GB respectively.

As for the cameras and battery we have a 16MP and 5MP configuration for the V10 and Galaxy Note 5. As for the iPhone 6S Plus, we have 12MP Ultra HD to the rear and a 5-megapixel camera up front, which also makes use of the display as a sort of flash for use in low-light conditions. And, as for battery you get 3,000mAh for the former two and a 2,750mAh battery for the latter.

We know that just reading the specs will not give you the answer because each camera has an array of great features to help persuade you that this is the phone for you, and so we have three videos below that pit each against each other.