We have some good news for those of you who have been keeping an eye on the unannounced LG ‘Star’ smartphone, as we have some brand new pictures of the device to show you, and reports that the overall performance of the handset is very good.

As reported from Phandroid, new images of the LG Star have surfaced from Android Forums, and one of the images also confirms a spec that we previously didn’t know about – the inclusion of a HDMI out port.

We also get confirmation that the handset will ship with a custom version of Android 2.2 Froyo, but as Phandroid rightly points out, the handset could well be receiving Android 2.3 OS Gingerbread depending on when it is released.

The person responsible for the new image leaks also reveals that benchmark tests on the LG Star concluded in much higher quadrant results than the popular Samsung Galaxy S handset, probably due to the fact that the Star will come packed with a Nvidia Tegra 2 chip. 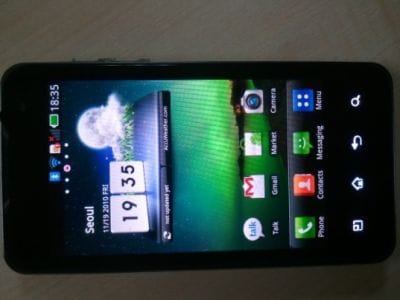 To put it in a nutshell, the LG Star is looking like a pretty impressive handset, and we can’t wait until we see some hands-on action. Check out the images over at Phandroid and let us know your early impressions of the LG Star. Do you want one?