LG Electronics has recently announced a new smartphone which at first glance looks quite similar to the LG Optimus 3D, however upon closer inspection you will see that there are no dual-cameras on the rear or 3D visuals on the display, instead this is a smartphone which will keep people typing quickly — yes, that’s right it has a slide-out QWERTY keyboard.

This smartphone is called the LG Optimus Q2, even though it features a slide-out QWERTY keyboard it is still relatively thin and light (12.3mm / 147 grams) — in fact when compared to its predecessor, the LU2300, it is 2mm thinner and 10 grams lighter — this is despite the fact that it packs in some seriously impressive tech specs.

So what tech specs does it boast? Well it features a 4-inch display which outputs at a WVGA resolution, this is said to be an IPS display which boasts 700nits brightness (which for those of you who don’t know is very impressive for a smartphone). Also there’s a 1.2GHz dual-core processor, WiFi (with Wi-Fi Direct support), a 5 megapixel camera on the rear and a front-facing camera for video calls. Sadly we do not have a full breakdown of tech specs.

Below you can see the LG Optimus Q2 images which we found over at Electonista — we are told that the Android buttons are touch-sensitive and there will be a white version released. Currently no details regarding pricing, a release date or carriers have been disclosed, therefore we will have to keep you posted. 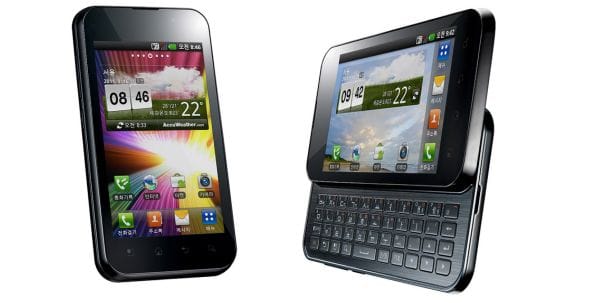 LG claim that this smartphone sets a new standard for QWERTY sliders and we have to agree, there really is no compromise as it is lighter than plenty of other smartphones on the market, yet still manages to boast a nice design and decent tech specs.

Will you be keeping a close eye on the LG Optimus Q2?