The LG Android range has, in the past, been somewhat average when it comes to performance against other Androids in general. Well not any more it seems with the new LG Optimus 2X being hailed as very much above average. Nvidia, who provide the new chipset for the Optimus, even described it as a ‘super phone.’

At CES 2011, Nvidia showed off the Optimus 2X as their launch product. With their history in graphics, the Tegra 2 chipset that they provide will be fantastic for handling graphics. It also comes with full HD capability. For more information about the LG Optimus 2X including specs you can read the full review at Pocket-lint, where they explain that the 2X has great performance, but their not sold on the “design of the phone”.
.

This brings us to the news of a hands-on review provided by PhoneArena plus their video of the HDMI cable in action. They put the LG through its paces, testing its gaming capability by using it as a remote to its video playback taking advantage of the 1080p support. Check out the video below. 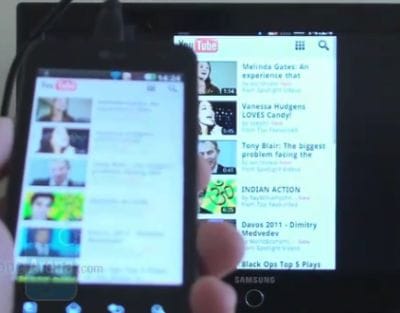