Last month we began unravelling the LG Optimus in terms of specifications and a release date, now we have come across a brief Cnet review which suggests that this smartphone may be a step in the right direction for a handset manufacturer who failed to seriously impacct the market in 2010.

The Cnet review is not fully detailed, however following some hands-on time at CES 2011 the article writer (Luke Westaway) was extremely impressed with its bright, clear screen, super fast performance and mini HDMI output, the one downfall is that it does not run the latest version of Google Android.

In terms of physical design it seems as if the LG Optimus 2X is a success, Luke seemed extremely happy with the four touch-sensitive buttons and overall glossy-look of the handset, also it is pretty light and not at too bulky measuring in at 63 by 124 by 11mm, you can see a photo of the Optimus 2X below. 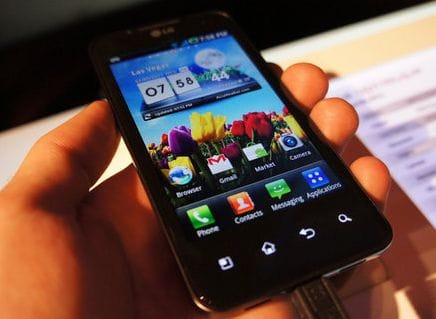 The HDMI-out port was tested by Cnet, apparently it worked well and the images displayed looked great, also the fact that there is a dual-core Tegra 2 1GHz processor meant that 1080p video was played extremely smoothly, this processor gives the handset a very snappy overall feel throughout the many aspects of the OS.

At the time of Cnet’s article the 2X ran Android 2.2 FroYo, an update to Android 2.3 Gingerbread is expected, however it is a shame that the handset wasn’t running this release at CES.

I must admit that I have never been to keen on LG smartphones, however the Optimus 2X does interest me, how about you?