The LG Nexus is still officially a rumor at this point, but after so many leaks earlier this week, it’s fair to say that there can be no secrets any more. The Android 4.1.2 device has shown up again in a new image leak, this time along side the Apple iPhone 5, which is likely to be its main competitor.

There’s still no word on what name this device will end up being called, but so far there are three main contenders – the LG Optimus G Nexus, the LG Nexus 4 or the slickest of the three, the LG Nexus. We told you earlier this week that the device is going to be rocking a 4.7-inch HD screen, and now new pictures of the device let you see exactly what this is going to look like when placed in your hand.

Unsurprisingly, it looks very good. There’s no LG branding on the front of the device, following on from the Galaxy Nexus and Nexus S before it with its minimalistic design and keeping the curved edges that we’ve seen on previous Nexus devices. A lot of consumers have moaned how big the iPhone 5 is with its new 4-inch display, but look at the image below which shows exactly how small it still is when directly compared with the 4.7-inch LG Nexus. 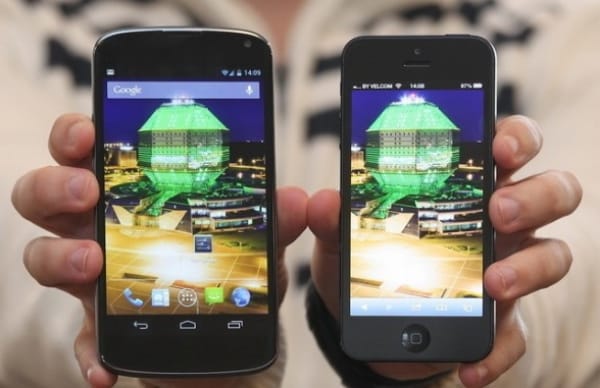 Aside from the pleasing news regarding a global quad-core Snapdragon S4 Pro processor, one of the main highlights of this device is going to rest in the fact that it will ship with a brand new version of Android – that being 4.1.2 Jelly Bean. Nexus devices are usually the first to any new Android software when available and it looks like Google will once again continue with this trend and give the honors to LG ahead of Samsung.

With all the buzz surrounding the Galaxy Note 2 and when it will finally release in the US, everyone was expecting this device to be the one that could really hurt Apple’s iPhone 5 sales. Now that LG has seemingly come out of nowhere with the next entry to the Nexus family, does their device now take number one priority for you? You can view a full picture gallery with the iPhone 5 side by side here.