The early success of the Nexus 4 meant that there would be a sequel to this, we just did not know when. The device did get off to a rocky start because of high demand caused serious stock issues, and it is this very reason why there have been doubts as to LG’s involvement.

Google blamed LG and LG blamed Google, but they both said they were still happy to work with each other. We have discussed on a number of occasions that The Nexus 5 would have a different manufacturer, with the likes of Sony and Motorola in the running.

This keeps going to and throw, because one minute LG is back on board, and the next Motorola is being tipped to build the Nexus 5. However, we might be able to shed more light on this, if we a recent Tweet is anything to go by. 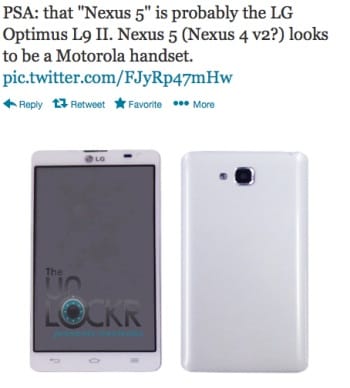 In the Tweet from Evleaks, which we learned thanks to Phones Review, they believe that the Nexus 5 is more than likely based on the LG Optimus L9 II, and not the G2 that we had assumed. The confusion with Motorola could be because they may be working on a Nexus 4 version 2.

This is an interesting possibility, one that we had not considered before. Do you think there will be a Nexus 5 release and a Nexus 4 sequel as suggested in the Tweet, if so then it would be interesting to know how they will differ in terms of design and specs?