Last week resulted in some massive leaks in regard to the LG Nexus 4 price and specs, although today we’ve noticed a recent forum post that reveals one of the best leaks to date for Google’s LG Nexus 4, and especially when it comes to our UK readers looking for details on the price. If you happen to love the latest smartphones and walk past mobile phone shops each week, always remember to take a look at the window, as you never know what you might see.

This is exactly what one technology fan did and noticed some marketing material for the new LG Nexus 4, which included details on the UK price and main features. You can see these images below with highlights of what they contain, although the full screen posters can be seen via the forum post here. If you are one of our US readers, remember that any price is in British pounds and you cannot do a straight conversion thanks to taxes like UK VAT.

Google’s LG Nexus 4 and its specs – the image below shows the main specs for the LG Nexus 4 thanks to a poster on one Carphone Warehouse window. These reveal pretty much what we already knew thanks to previous leaks, which reveal Android 4.1 Jelly Bean, 12 hours of talk time, a weight of 139g, a 8MP camera with LED flash, and a quad core S4 Snapdragon processor with a clock speed of 1.5GHz. Below the LG Nexus 4 title and above the specs is a little tagline, which claims the device is “LG’s Google Nexus Super phone“. 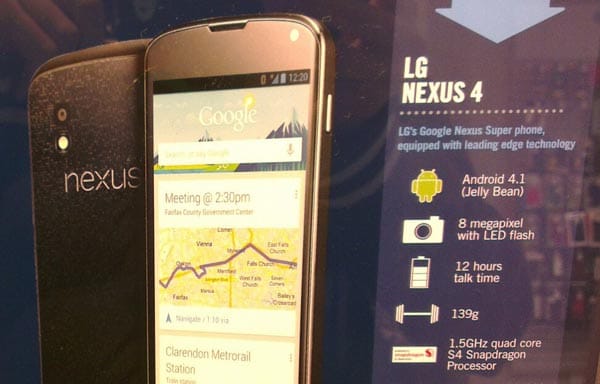 LG Nexus 4 price – The next advertisement repeats some of the above specs but also contains the LG Nexus 4 price, which Carphone Warehouse are apparently stating to be “Free” from £31 a month. If you want the smartphone with a SIM free plan, then you should expect to pay just under £390 in this particular UK mobile phone store. It is fair to say the US LG Nexus 4 price will be a little more than this in dollars, but a lot less when doing a conversion thanks to UK taxes. 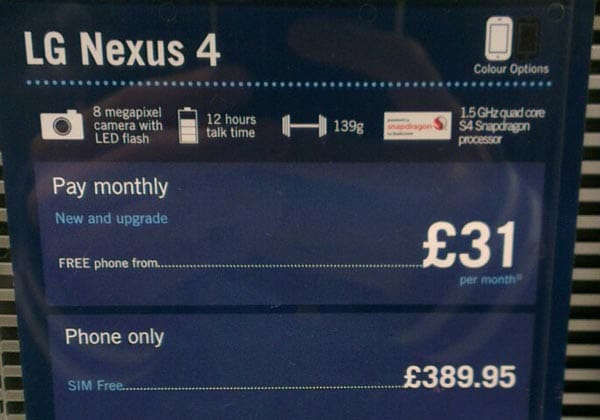 Now that Google had to stop the event this Monday we wonder if the UK LG Nexus 4 launch will go ahead as planned, although we’ll find out soon enough considering a reschedule is expected within days, and especially after Hurricane Sandy passes NYC.