If you are planning on getting the impressive looking LG G-Slate Tablet when it makes an appearance in the US and Europe, you’ll definitely want to check out a new video of the device which has just been uploaded to YouTube.

As reported from Engadget, the G-Slate or the Optimus Pad as it is also known will be making it’s long awaited appearance at the Mobile World Congress, which kicks off in Barcelona on February 14th.

The video gives us a quick run-through of the key features which will be present in the G-Slate, and it’s fair to say that they are very impressive indeed. Aside from running on the newest version of Android (3.0 Honeycomb), the G-Slate will also feature a 8.9-inch 3D display, a Tegra 2 dual-core processor, a front facing camera, and also a back camera capable of snapping 3D photos.

If that is not enough for you, the G-Slate will also have support for 1080p video recording and 32GB of storage memory to play around with. Check out the video below and let us know your thoughts on it. 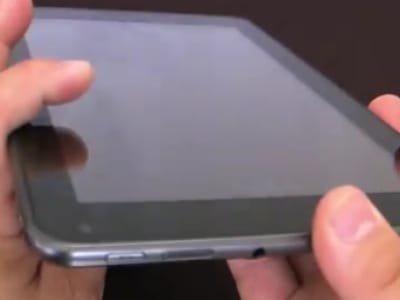 We’ve said it before, but this device definitely has to be a contender to the Apple iPad. The Motorola Xoom looks impressive too, but it’s the G-Slate that we’re really looking forward to.