10 days ago we posted an article which suggested that the LG G-Slate was one of the most highly anticipated tablets of 2011, in fact IntoMobile suggested that it was the second most exciting tablet on its way, coming second to the Apple iPad 2.

Since this post I have been keeping my eyes pealed for all of the LG G-Slate news I can find to see what all of the fuss is about, however I have not came across too much so far.

Today I managed to see a brief glimpse of the G-Slate in a YouTube video, we have embedded the video at the end of this post (scroll down to watch it), in the video a YouTube user with the alias MysteryGuitarM talks about 3D cameras etc, 3 minutes and 40 seconds into the video he shows you a “special thing” which features 3D cameras in the back, this “special thing” is undoubtedly the LG G-Slate, as Engadget point out the back of the tablet looks identical in terms of design to the LG Optimus 2X Android smartphone. 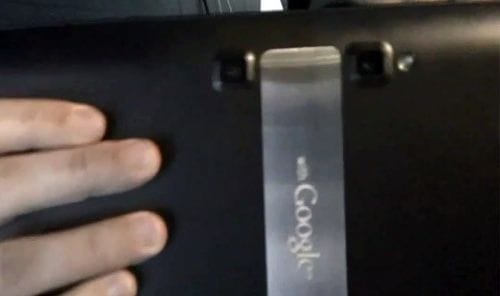 This in my opinion is enough to confirm that the LG G-Slate will definitely feature dual 3D cameras when it arrives sometime this year, at the moment we have no idea as to when it will become available, therefore we will have to keep you updated as we hear more news and rumors.