Previously we have brought you news that the LG G-Slate would probably feature 3D capability, with information about dual 3D cameras allowing you to capture videos in 3D. Now we bring you exciting news as T-Mobile has confirmed that it will indeed be 3D compatible.

The announcement came just hours after Engadget reported that, an image of a pair of 3D glasses similar to the one above, was posted on T-Mobile’s official Facebook page. They described it as ‘a little teaser’ adding to the rumors that the G-Slate would possibly include 3D. Little did they know it would later be confirmed. Read their full report here.

This news means that the LG G-Slate will be one of the first tablets out there that has 3D features. It will come with 3D graphics support built in allowing users to film and view their own videos in 3D. They can also view content in 3D HD on the actual device using the 3D glasses that will be available. For the full announcement go to T-Mobile.com. 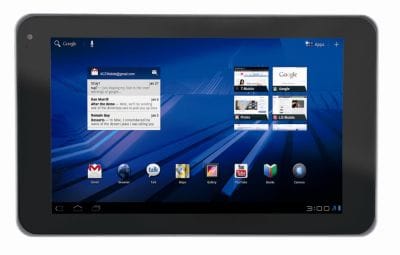 Some of the specs include two rear-facing cameras, one a 5mp camera and the other a HD 1080p stereoscopic video recorder, while on the front a 2mp camera allowing sharp video chat with family and friends. All this can be viewed on a 3D-capable HD multi-touch 8.9” display. Users can enjoy viewing on their device in 720p HD or can use the HDMI output to experience full 1080p HD on other HD and 3D displays. The combined strength of the Android 3.0 Honeycomb OS, the Nvidia Tegra 2 Processor and the 4G network that T-Mobile provide, makes the LG G-Slate one to watch when it’s finally unleashed in Spring sometime.

What do you think? Let us know.