Just when you thought that no new tablets would be appearing before the start of the new year at CES 2014, LG has surprised a lot of consumers by unleashing the LG G Pad 8.3 tablet this week. It is available to buy in the US and it could be a great alternative to the likes of the popular Nexus 7 2013 model and the latest iPad Mini with Retina display.

One of the biggest factors of the LG G Pad 8.3, is that it is actually a certified Google Play device. This is massive for consumers as it essentially means that the tablet is going to be first in line to receive the latest Android updates, just like Google’s Nexus lineup.

The LG G Pad 8.3 is a very capable device as well, offering the unique tablet size of 8.3-inches, which is interesting considering that there are rumors swirling around at the moment that Google are planning to release a Nexus 8 tablet of their own – that could be built by LG.

There’s also a rear 5MP on the back, a 1.3MP camera on the front and a 4,600 mAh battery. The price for these features is $350 on the Google Play Store – don’t forget that this tablet also ships with Android 4.4 Kitkat out of the box, the very latest version of Android. 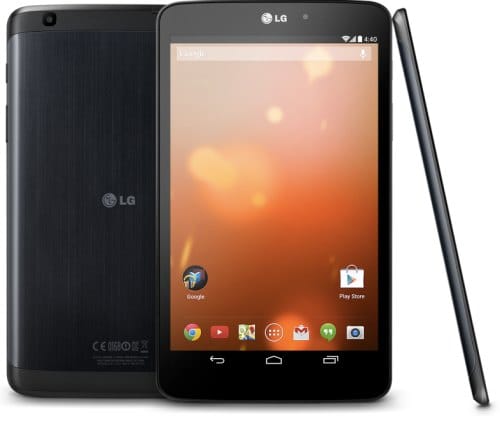 So how does these features compare with the two tablets mentioned above, the Nexus 7 2013 and the iPad Mini 2? At a cheaper price of $230, the 16GB Nexus 7 features a slower 1.5Ghz quad-core Snapdragon S4 Pro processor with 2GB of RAM.

Unlike the LG G Pad 8.3 though, the storage on the 16GB Nexus 7 cannot be upgraded to 64GB with MicroSD. This is similar to the $399 iPad Mini with 16GB, although the battery life and 2048 x 1536 display resolution of Apple’s device are two of the main highlights.

The upgradeable storage on the $350 LG G Pad 8.3 makes the device very appealing in our opinion, but it’s still $100 more than the Nexus 7 2013 which continues to offer amazing value and performance for your money.

Are you interested in LG’s new tablet? Don’t be surprised if we see Google announce the Nexus 8 officially now – they could have been waiting for LG to make their move first.

What are the key deal breakers for you between the three tablets – if any?