In case you were thinking that LG were listed down the pecking order in terms of smartphone dominance, that may be set to change next year, as we have details on an upcoming ‘superphone’ from LG which is packed with specs to die for.

As reported from BGR, the first picture of the device has been obtained by Engadget, and it reveals an upcoming Android device which is due for release during the early part of next year. The mouthwatering specs include a 4-inch display, dual-core Nvidia Tegra 2 processor, an 8 megapixel rear camera, a front-facing camera, 1080p video recording, 1500 mAh battery and support for MicroSD card.

We’re presuming that the version of Android is going to be 2.3 Gingerbread since a release is just around the corner, while BGR also state that the User Interface is unlikely to be tampered with too much by LG – good news that one.

Hopefully we’ll be able to bring you more details on this handset soon. Take a look at the picture below and let us know your initial thoughts on it. 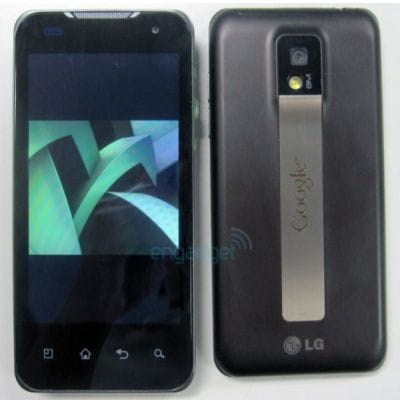