If you are thinking of buying the new Lenovo Thinkpad 8, you are probably wondering how Lenovo’s new lightweight tablet compares against some of the leading competitors on the market.

With this in mind, we now have a brief Lenovo Thinkpad 8 review for you to check out, against the iPad Mini with Retina Display – which many consumers rate as one of the best money can buy at the moment.

The Lenovo Thinkpad 8 was unveiled at CES 2014 and is already ready for a full retail release later in January. The big talking point about this Lenovo tablet, is that it comes with Windows 8.1 Pro – which you should know by now is a very big deal.

It essentially means that you’ll be able to switch between the fancy new Metro-style UI, and also the traditional Windows interface when you want to go into PC mode and install full Windows software – Windows 8.1 RT doesn’t allow you to do this remember.

Aside from this pleasing aspect, the Lenovo Thinkpad also impresses in other areas as well. For example it comes with a 2.4Ghz quad-core Intel Bay Trail processor, with 2GB of RAM and Intel HD Graphics. It also has an 8 megapixel rear camera, with a 2MP front camera for web chats and other activities. 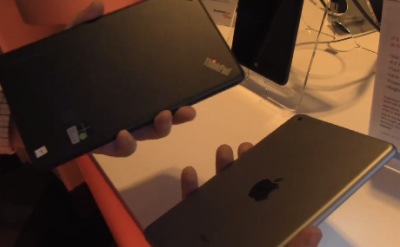 Battery life is said to be very impressive, with Lenovo claiming that the Thinkpad 8 will be able to offer around 8 hours of battery life. There is also adequate connectivity options as well, with microUSB 3.0, microHDMI and microSD inputs for your comfort.

One advantage that the ThinkPad 8 has Vs the new iPad Mini though, is external storage. Apple’s device doesn’t come with the option of increasing memory. However, the Thinkpad 8 will be offered in 32GB, 64GB and 128GB varieties – along with the bonus of MicroSD support on top.

The 32GB Thinkpad 8 is also competitively priced starting at $399, compared to the iPad Mini with Retina, which is the same price but 16GB with no external storage. 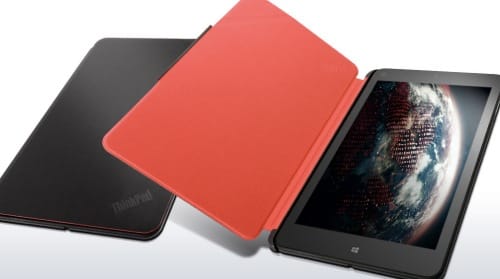 We can’t wait to get a hands-on look at the Lenovo Thinkpad 8, to see how Windows 8.1 Pro looks on the device up close and personal. Lenovo could have a real winner on their hands here once it launches at the end of January.

Check out the included specs review below and let us know your initial impressions of the Thinkpad 8. Do you think it is actually better than Apple’s iPad Mini 2 or not?