Just when you were under the assumption that ASUS would release the first Ice Cream Sandwich tablet aka the Transformer Prime before the end of the year as an exclusive, it looks like there’s a new device which wants to share the Android 4.0 limelight – and that honor falls to Lenovo.

We’ve just heard that the Chinese company will also release an Ice Cream Sandwich before the end of the year, but unlike the Transformer Prime, this one will apparently come pre-loaded with the delights of Ice Cream Sandwich, according to an article over at Engadget.

There’s no official name for the device yet since it isn’t official as such, but there are some juicy specs details to share you. Aside from Ice Cream Sandwich, Lenovo’s tablet will also be packing a state of the art 1.6GHz quad-core Tegra 3 processor straight out of NVIDIA’s lab, as well as 2GB of RAM on top, giving consumers some serious firepower in terms of gaming potential.

There’s also a camera on the back of the tablet as standard, but we don’t know what megapixel quality it will be yet. Interestingly, the tablet also comes with a ‘host USB port’, meaning that it is located on the tablet itself rather than on the side – this can be seen in a provided image from Engadget below.

Hopefully we can expect an official announcement from the company sometime this week, as we’re very eager to see full specs of this beast. We are still waiting to see what kind of display Lenovo will supply with this tablet, and what kind of availability we should be looking at. Remember that ASUS said that their Prime tablet will release with Honeycomb 3.2 with an update to Ice Cream Sandwich coming afterwards. Does this now make the Lenovo tablet more favorable?

How would you rate Lenovo’s build quality compared to say ASUS and other leading computer manufacturers – do you rate them or not? 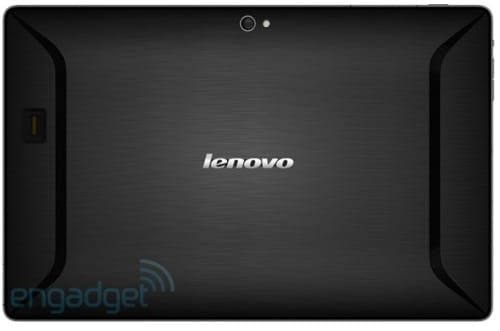