You might have been seeing a lot of discussions in regard to a new device called the Lenovo IdeaCentre Stick 300, which is a PC stick that will plug into the HDMI port of any display or TV, and in doing so will turn it into a full-on PC. This does seem like a really good idea, if Lenovo gets things right.

We already know some of the basic Lenovo specs thanks to Liliputing, such as 32GB of storage, a microSD card slot, WiFi, Bluetooth and a micro USB cable. However, there are still so many things we do not know, such as its processor, although there are rumors that the Intel Atom Z3735 Bay Trail could be used, seeing as though this was the CPU of choice for the first generation Intel Compute Stick. 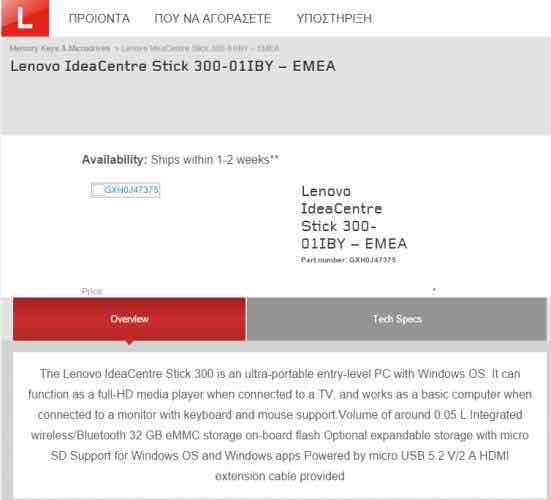 There are many more unknowns, one of which is the Lenovo IdeaCentre Stick 300 design, although we suspect the computer maker will come up with something pretty smart. You might think it is hard to come up with a unique design when all it will be is a stick, but it needs to stand out against rival devices.

What we love about the idea of Lenovo getting into the PC stick market is more choice, and that also means prices falling for rival devices if they are not able to compete with Lenovo’s efforts in terms of features or design.

For those of you that do not know much about these sticks, it is a very basic computer, although more people tend to use them as a media center to watch movies, TV shows and to also access their music accounts. However, unlike a set-top-box, you also have the ability to perform basic functions you would on a PC, so the best of both worlds.

What price point should Lenovo choose for its IdeaCentre Stick 300?