This is the LEGO City 60166 Coast Guard Heavy-duty Rescue Helicopter and our quick review of what you get inside the box, and how it looks after following the organised instructions. Also, we’ll highlight a price drop of a 1/3 off the LEGO City Helicopter 60166 on Tesco Direct. 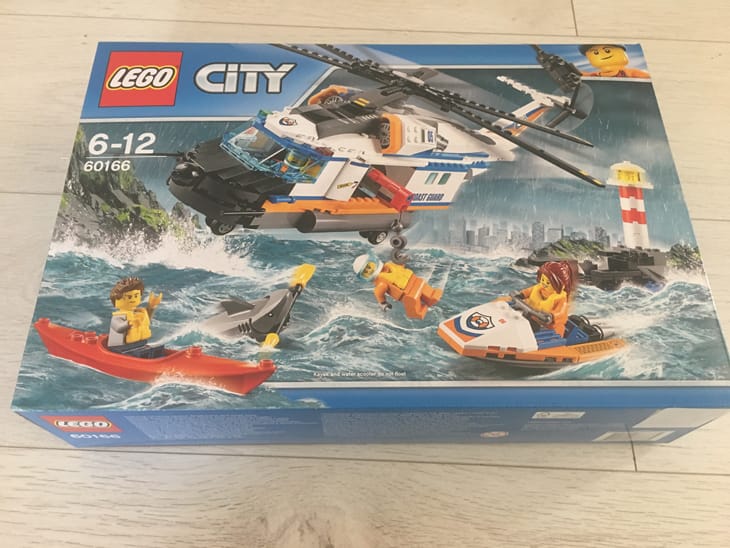 You can see photos of this LEGO Helicopter box front above and rear below. This is a sizeable box and while not as expensive as some £100+ sets, you get a lot for the current £26 price on Tesco (Offer ends 18/04/18). Let’s jump to our 60166 review of what’s inside and a look at how everything looks once built. 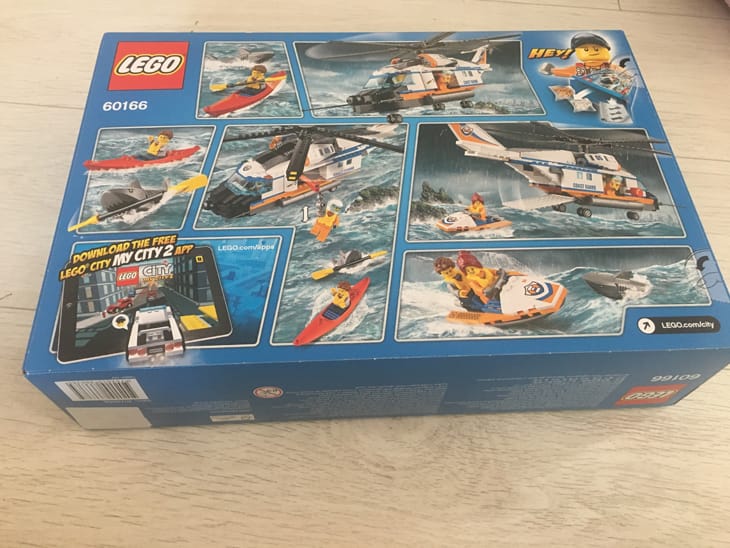 Inside you will find 4 LEGO minifigures that include a kayaker and 3 coast guard members, also a shipwreck, lighthouse, and kayak. The photo below shows everything once unboxed. 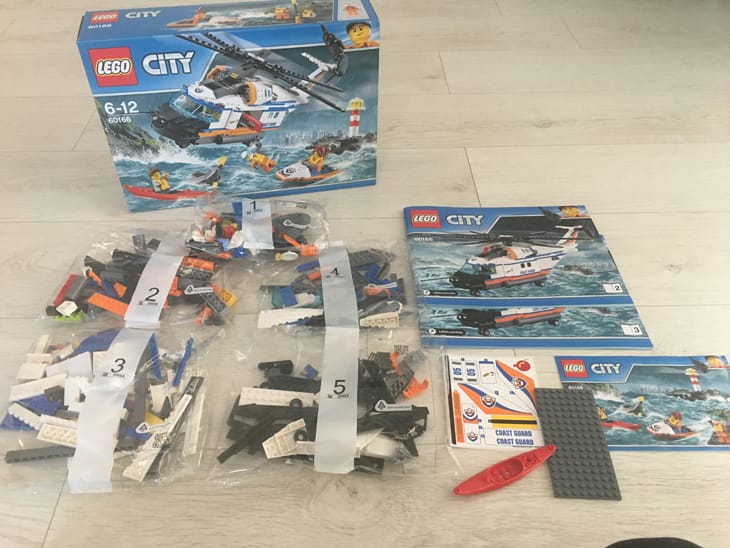 You’ll find instructions for each stage of the LEGO City Helicopter 60166 construction, so we recommend you review these before starting to make sure everything is included and nothing is missing. 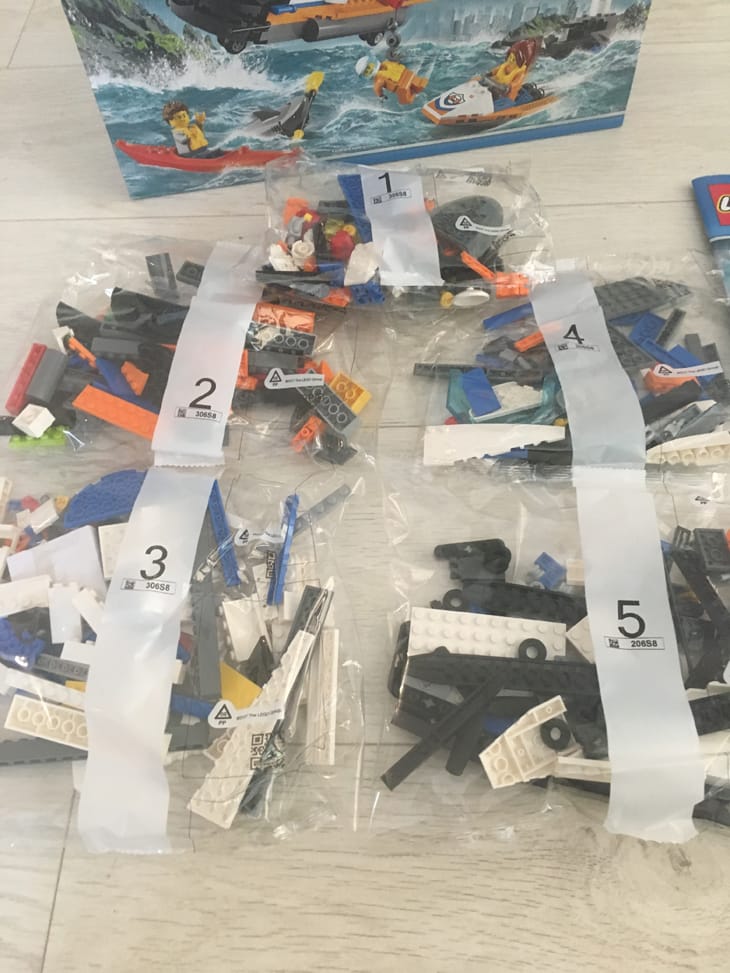 The bags a numbered along with the instructions, it really couldn’t be simpler to be organised with each stage. There’s 415 pieces in this LEGO set and these are spread between five bags, below you can see bag one along with the matching instructions. Once again, we didn’t have any problems while putting everything together. 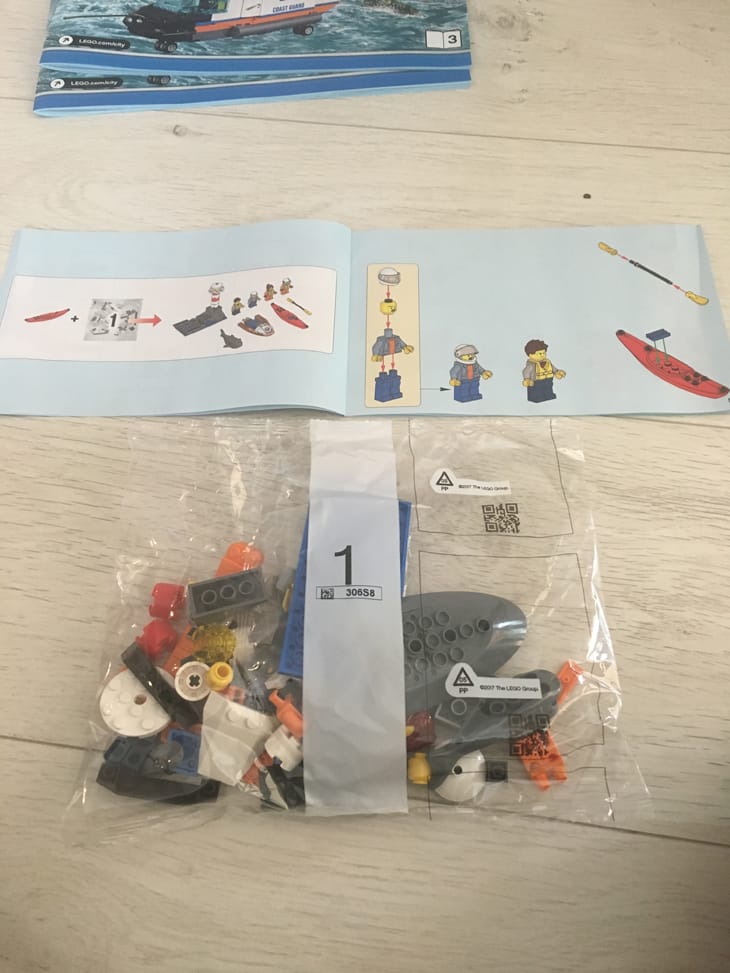 You can see a close up with the lighthouse, some of the figures, shark, and kayak below. 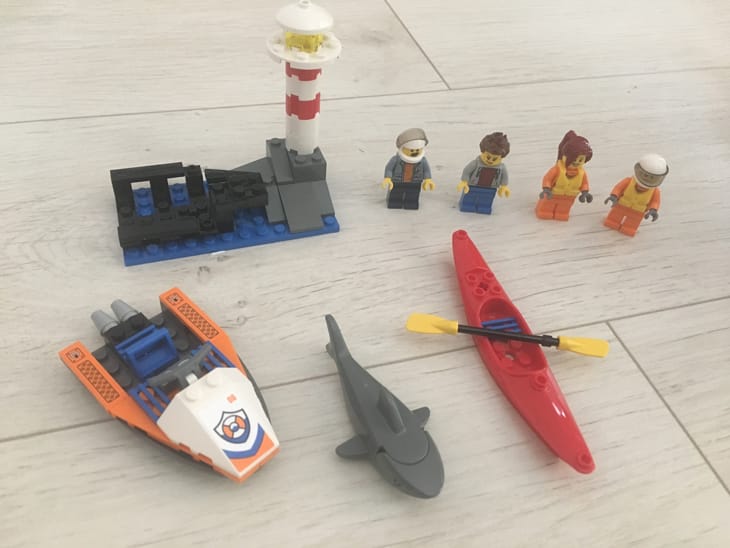 There will be so much fun had with this set, hours of play only limited by imagination. The kayaker is seen in the kayak below along with a male coast guard member. 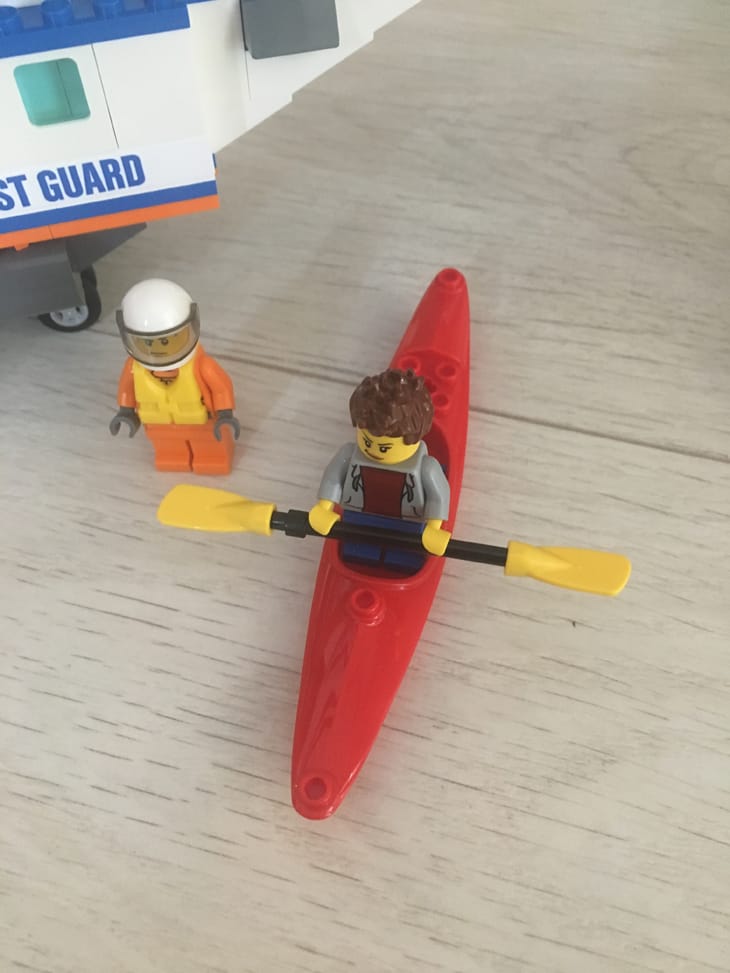 You can launch the water scooter after sliding the Helicopter doors open and lowering the ramp. The water scooter is seen below with a female coast guard member riding it. 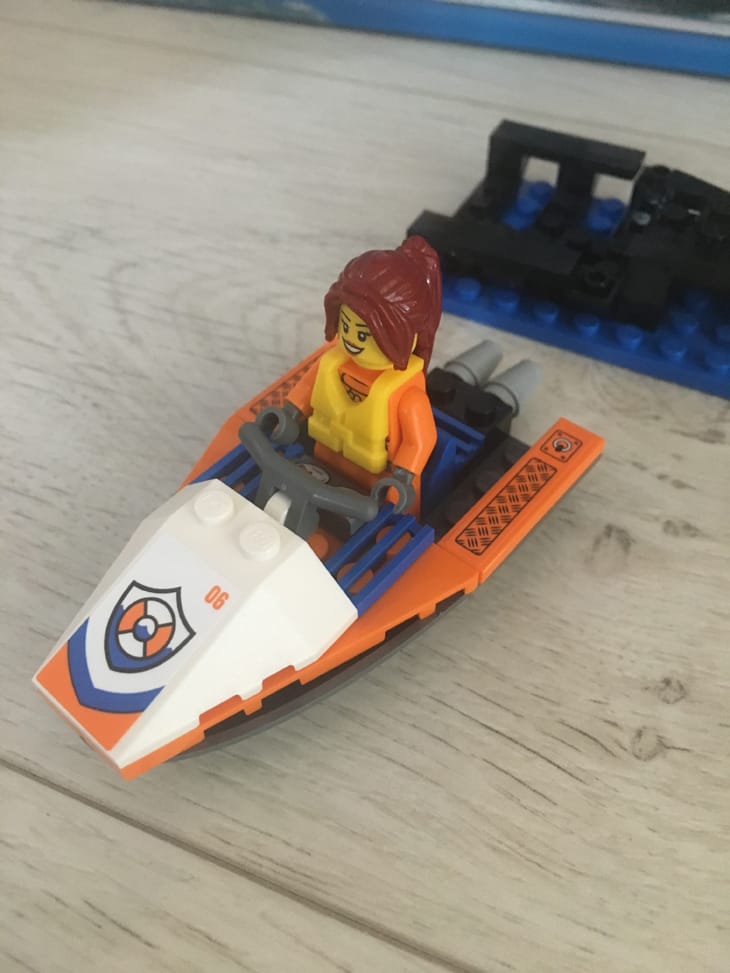 During a rescue you can lower the winch to allow the coast guard to get to the casualty, and then reel them in to safety. The winch on the side of the LEGO City Helicopter is seen below. 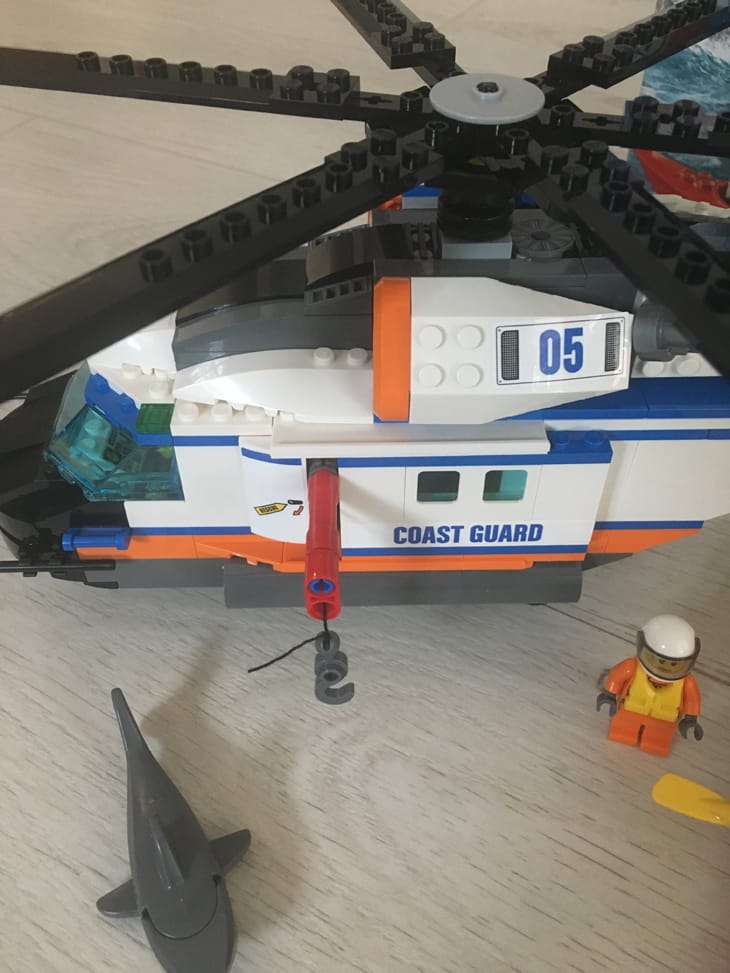 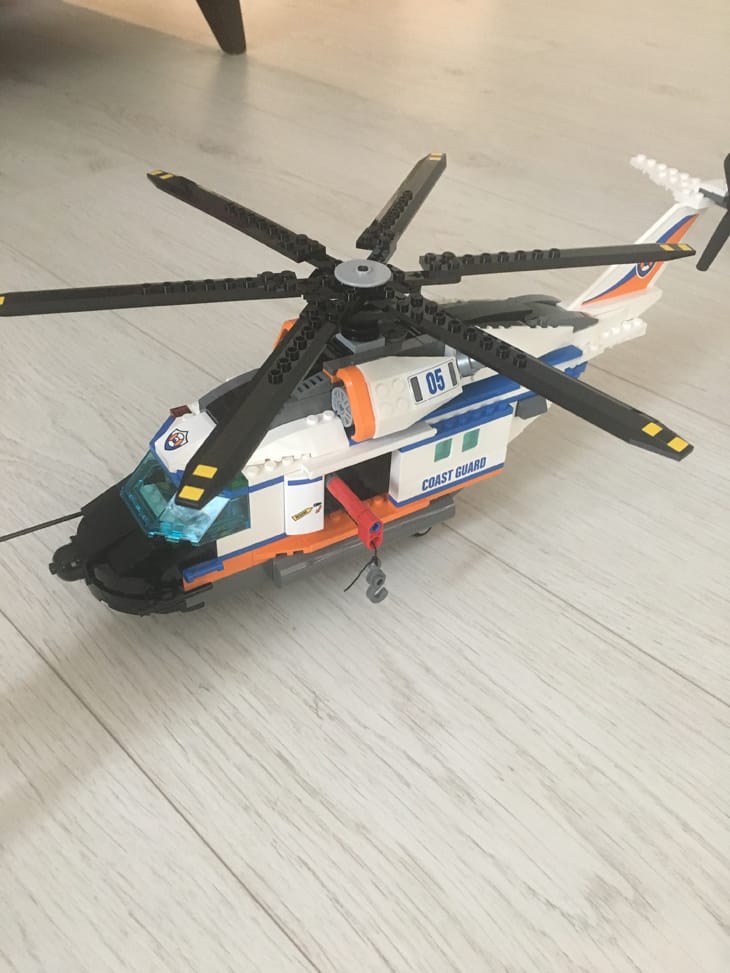 So what you waiting for, spin the rotors to take off in the Heavy-duty Helicopter and rush to the rescue with your LEGO City coast guard crew. In this set you’ll find one female and two male coast guard members, a shark figure, a kayaker with kayak and paddle, as well as expanding play with a lighthouse and shipwreck. 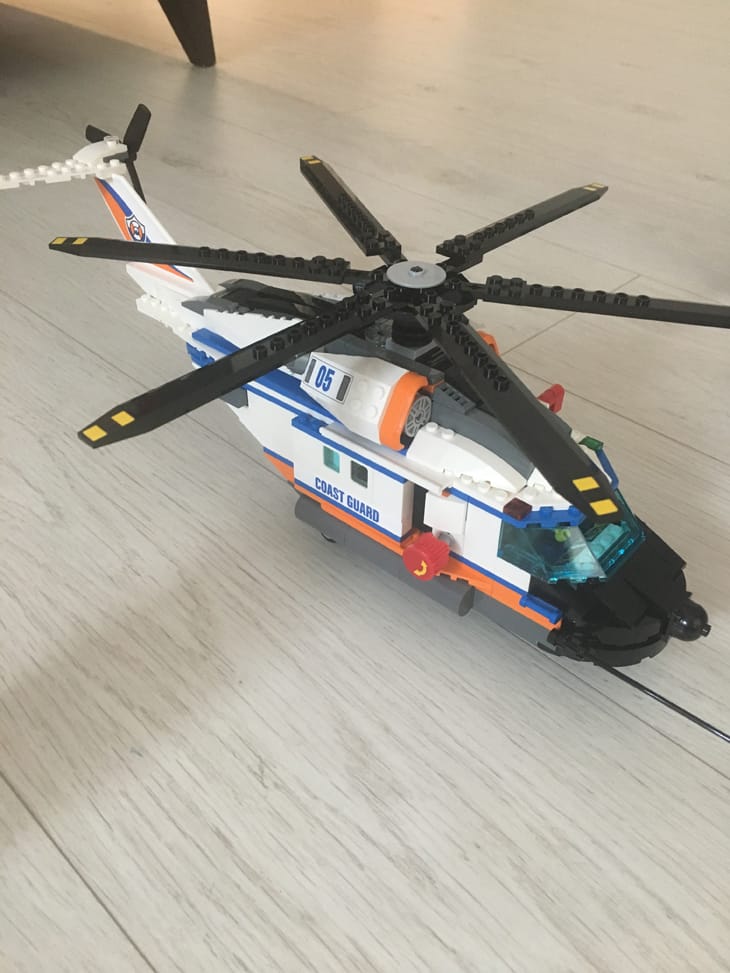 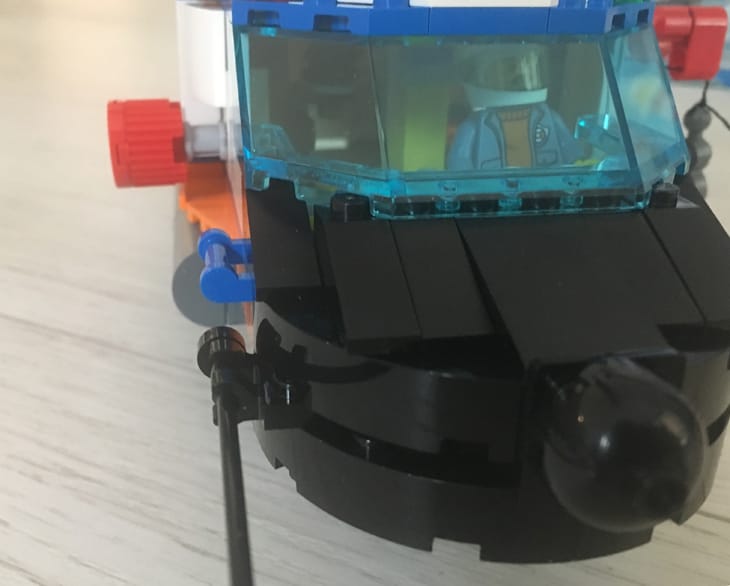