An entertaining bar tending simulation has recently been released for iOS devices. Bar Rush: Bartender Simulator 1.0 is available for owners of the iPhone, iPad, and iPod Touch.

The application has been released by Vancouver based ComboApp, and it will allow users to master a wide range of drinks and cocktails. Players find themselves behind a bar as they try and master the drinks which are found in real bars, and ordered by real customers.

There is an in-depth drink guide where over fifty unique ingredients, can be mixed together to create hundreds of different drinks. As users play the game they can also learn a new skill.

Players start by serving drinks, and have to learn to mix and match drinks as quick as possible. Many users have already downloaded the game, and have given it some good reviews on the App Store.

Other features include searchable online leader board, cocktail glossary, and three step game play: Mix, Shake and Serve, and much more. Other features which will be added soon include access to iTunes Music Library, various difficulty levels, and more ingredients and cocktail recipes. 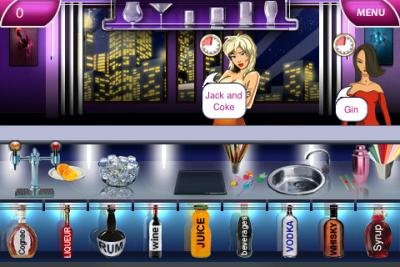 Bar Rush: Bartender Simulator 1.0 is available worldwide on the App Store for the introductory price of $0.99/£0.59. iOS 3.0 or later required.