The whole Fallout 4 saga has been an interesting one because the upcoming title has already been confirmed; yet we have no news as to its eventual release date, or the basis of its story and setting. However, there was a great deal of excitement when a rumored Fallout 4 countdown website had appeared, although that later turned out to be a hoax.

It’s for that very reason why we believe this latest Fallout 4 rumor is a case of dÃ©jÃ  vu because we know we have been here before. According to the latest rumor there is a listing on IMDB, which is Fallout: Shadows of Boston, and this has now led many people to believe that this is the name of the next game in the franchise.

While this could be true seeing as though we have already seen suggestions of a Boston setting, it’s the Fallout: Shadows of Boston release date that has us intrigued, as it states 2017. We just cannot see this game taking another 3 years to develop, as that would mean a gap of 7 years between Fallout 3 and 4. 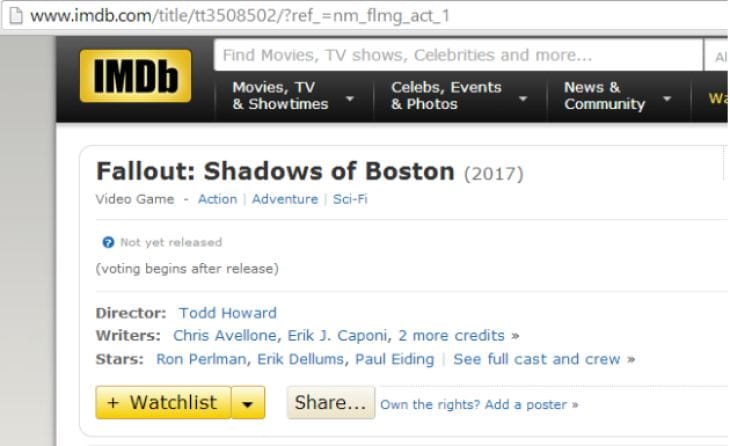 Reasons this is a hoax — There are several reasons to doubt this is the real deal, one of them being the fact that the IMDB listing says Fallout: Shadows of Boston has already been announced. Another reason is, when was the last time a publisher announced a game three years in advance?

Update: In another twist, the Fallout: Shadows of Boston listing on IMDB has now been removed, so I guess that answers that doesn’t it?