Land Rover had already teased some of its technology to aide the Discovery Vision concept while off-road, but they have now elaborated on this by teasing other aspects of the vehicle ahead of its New York Auto Show debut tomorrow. We get this each year, a highly anticipated vehicle getting previewed ahead of an official debut, and so we are not surprised by Land Rover’s move.

The British company, although owned by Tata Motors, showcased the Land Rover Discovery Vision concept on board the USS Intrepid, alongside the Virgin Galactic. The two are very similar in the way that they are visions of the future, hence why the two have now entered into a global partnership.

We have so much to talk about in regard to the Land Rover Discovery Vision and its innovative features, which we will get to over the coming days and weeks, but it is the all-terrain capability that is of more interest to us, as this is what Land Rover is all about. 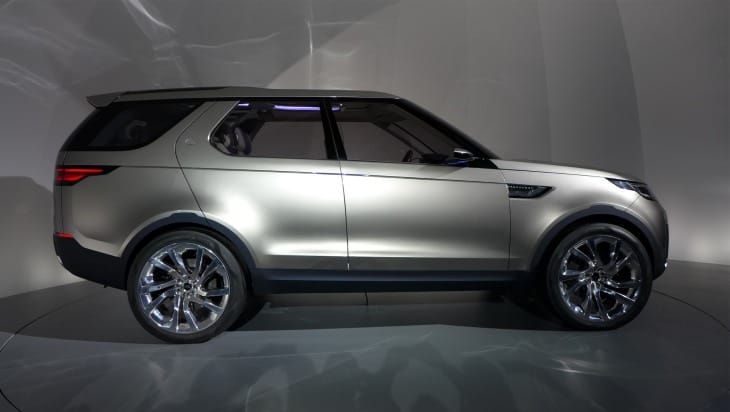 If you find yourself off the beaten track most vehicles will fall at the first hurdle, but not the Discovery Vision, as they vehicles that will fall under this new category will feel more at home that on the gray stuff.

Both its build and design has one purpose in mind, and that is to make it the ultimate place to be while driving on all terrains. This is made possible with a variety of technologies, which include Remote Control Drive, Laser Terrain Scanning, Laser Referencing, Transparent Bonnet, and Terrain Response.

All these systems work in unison together to help give you the ultimate in off-road capability, which you can read about in more detail on the Land Rover website.

However, it isn’t all good news though because while Land Rover seems to be doing a stellar job beneath the skin, it’s the exterior that we have an issue with. Is it just us, or does the Land Rover Discovery Vision concept look at lot like the Ford Explorer concept?