We recently reported to you about Italian supercar manufacturer Lamborghini’s new offering, the Aventador LP700-4. Today we have some more of their magic to show you with their Sesto Elemento.

The carbon based exotica was first seen at last year’s Paris Motor Show, and many felt wrongly that it could be the replacement for the Murcielago LP640, according to an article by James Edwards of Insideline. It is powered by a V10 engine pushing out 570 hp, but because it is made from almost entirely carbon fiber it will reach 62mph in only 2.5 seconds.

It also has a top speed of over 200mph, and its performance is mainly down to its weight, which is only 999kg. The front end of the bodywork has been made from just one piece of carbon fiber, and even the exhaust and suspension are made from the material.

TopSpeed have a Lamborghini press release about the car, and are reporting that the Sesto Elemento will go into production as a track only special unfortunately. According to a report by Automotive News only 5 to 10 will be built, and could cost you a cool $3,500,000. 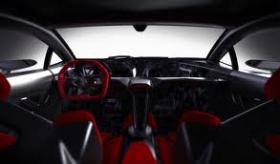 Lamborghini CEO Stephan Winkelmann has recently suggested the Estoque four door model is getting closer to production, according to a recent article on Insideline. They also have the Sant’Agata in the pipelines as the replacement for the Gallardo, and there is speculation of an entry level Lamborghini which could be called the Cabrera. There has been talk of the Aventador model line to eventually have Super Veloce and Spyder variants.