Late yesterday we informed you that Sprint unveiled the Kyocera Echo smartphone, which as you know offers a dual-screen — the first of its kind. Then this morning we decided to take a closer look at the specs and more photos, so now we thought we would look at why Kyocera says that this handsets has “4-in-1 Versatility.”

These are all to do with different modes, and it is the first that is just like most other handsets on the market, “Single-Screen Mode.” This is its single screen, which will be used for standard function. The second is “Simul-Task Mode”, this allows you to choose from two of Echo’s 7 core apps, you can then run both at the same time on both screens.

The third is “Optimized Mode”. These apps have been optimized and when displayed together will work in unison; an example of this is having the email on one screen and the virtual keypad on the second. The final one is “Tablet Model” and allows you to use both screens and make a large 4.7-inch display. This mode is ideal for a number of multimedia uses. For more details on this visit the official Kyocera Echo website. 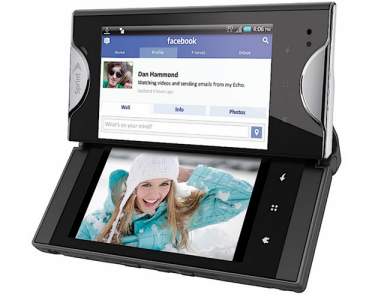 There is an interesting article over on OSM by Mike Smith, where he touches on the subject that this latest handset could become a game changer. He suggests that a dual-screen handset could become the norm over time — but I would not hold breath on that one. Can you see the Apple iPhone with two displays?

So there you have it, a new smartphone format, but are you convinced?