We have covered a number of aspects on the upcoming Kyocera Echo, which will be coming to Sprint; but what about its multitasking feature? It’s all very well having these specs and dual-screen, but what’s the use if the CPU is not up to the task? We have high hopes for the Echo, but this issue could cause a problem.

We already know about that second screen, which will make it something like a Nintendo DS; but the handheld is up to the job, but it does not have to handle multitasking like the latest Sprint bound device will have to — where does this leave the handset then?

Ars Technica has picked up on an article covered by PC World, where they had some hands-on time with said device. It seems that the software is more than up to the job of keeping things running, but it is the single-core 1GHz Snapdragon processor that is not — the same used in the HTC Thunderbolt. 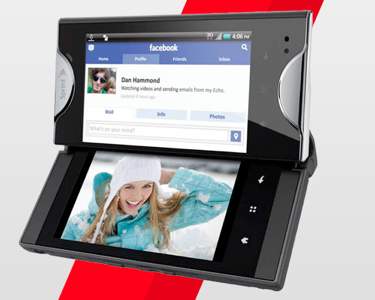 With the HTC handset the CPU only has to offer enough performance for one display, the Echo adds some strain to this because of having two. We would certainly like to know who’s decision it was to give the new handset from Kyocera just a single-core processor? We already know that Android 2.2 will be the OS of choice, but it could get a bump to 2.4. We already discussed the reason why some handsets will miss Google Android 2.3 altogether.

Sprint has said that Echo will be almost like at tablet, but PCMag is not convinced, as they believe that the bezel in the center will distract the user.

Do you think that the CPU is up to the task, and will you use the Kyocera Echo as a tablet?