There may well be quite a few recipe apps available for the Apple iPad already, but I don’t think any of them are going to be as much fun as the recently released Kung Fu Panda 2 Interactive Cookbook. This fun recipe app for iPad is sure to entice the entire family into the kitchen to cook.

According to a recent article by Dusan over on the intomobile.com website, the Kung Fu Panda 2 Interactive Cookbook provides users with ‘favorite Kung Fu Panda’ recipes, as well as clips from the actual movie, cooking demonstration videos, animations and much more.

The Kung Fu Panda 2 Interactive Cookbook focuses on Asian dishes, which have been additionally spiced up and renamed in order for them to be more appealing to kids. This includes recipes such as ‘Mr. Ping’s Tofu Stir-Fry,’ ‘Bunny Family Carrot and Sesame Salad’ and ‘Dragon Warrior Dumplings.’ 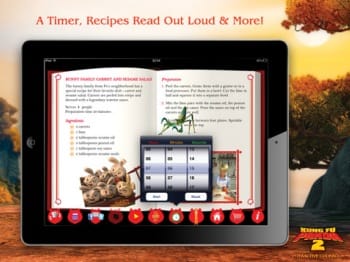 Users have the option of either reading the recipe for themselves, or letting their iPad and the app read it for them. The application also comes with additional features such as a cooking timer, favorite recipes bookmark and a unit converter for US and European measurements and even number of servings.

The application also enables users to share their recipes via Twitter, Facebook and email, as well as email shopping lists to their accounts. Do you own an Apple iPad? If so, will you be downloading the Kung Fu Panda 2 Interactive Cookbook app?